Schnatter told shareholders on a conference call that NFL players’ protests over racial injustice are killing his pizza business during the games, according to the New York Daily News. He also blamed NFL Commissioner Roger Goodell for not putting the protesting players in their place. A prominent sponsor of the NFL, the pizza company’s position is that the protests are to blame for the NFL’s sagging ratings, which, in turn, are driving down pizza sales.

“The NFL has hurt us,” Schnatter told his shareholders. “We are disappointed the NFL and its leadership did not resolve this.”

NFL players and owners, of course, did resolve the issue of what to do about players kneeling during the national anthem by letting the protests continue.

This, clearly, was not the resolution Papa John’s wanted.

The pizza company didn’t share just how much its sales had dropped, but Papa John’s President and Chief Operating Officer Steve Ritchie explained that the popularity of the NFL and that of Papa John’s are linked. The pizza company has “preferred pizza” partnerships with 23 of the league’s 32 teams.

“We expect [the sales decline] to persist unless a solution is put in place,” Ritchie said.

The Daily News reports that the NFL’s ratings are down—but so are network TV’s numbers generally:

Through seven weeks, NFL TV ratings are down 5 percent from this point last season. While some point to the clashes over anthem demonstrations, network TV numbers in general are down, according to CNN. The four major networks are all down an average of 8 percent in prime time.

ESPN’s Jemele Hill quickly clapped back at the mediocre pizza company on Twitter: “Sorry racial injustice couldn’t be ended as easily as adding an extra topping and a side of ranch,” Hill wrote.

The company has pulled much of its NFL advertising, its executives say, with the league granting Papa John’s credits for future TV spots.

Those spots, by the way, will still feature spokesperson Peyton Manning, who has been accused of sexual harassment. In fact, his accuser, Jamie Naughright, spoke to Inside Edition on Monday about Manning’s alleged harassment of her at the University of Tennessee.
Papa John’s, oddly enough, hasn’t addressed that. 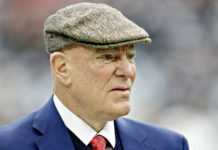 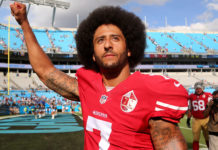 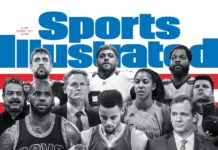