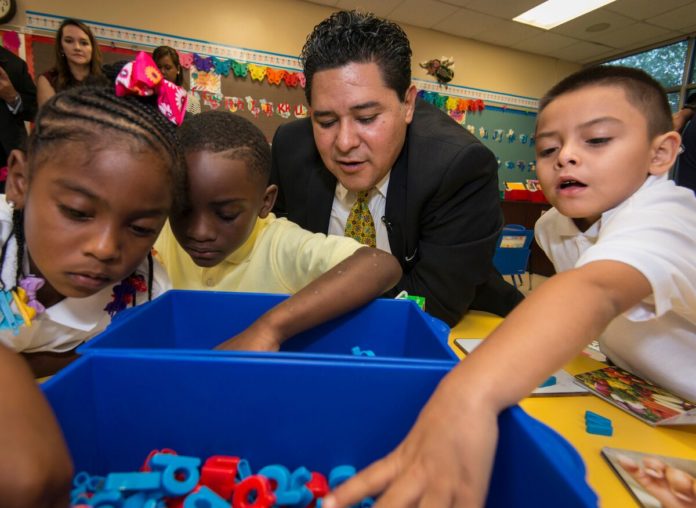 HISD’s new superintendent knew going in that his work was cut out for him. From issues with low-performing schools, to dissention on the board, to a push toward charter schools, Richard A. Carranza has forged full steam ahead since taking charge of the nation’s eighth largest school district in August.

One of Carranza’s biggest issues is the number of parents whose children are leaving the district for charter schools.

“I think the vast majority of parents who chose to leave HISD do so not necessarily seeking something better,” he said. “It’s that they’ve had a negative experience or they feel like they haven’t been served.”

In an interview with the Defender, Carranza, who replaced Dr. Terry Grier, discussed pressing issues facing the district and how he plans to address them.

Defender: What’s your vision for the district, considering the average tenure of a superintendent is five to seven years?

Carranza: I think that the unifying vision for HISD is to understand what it is that we want, and what do we want our children to know and do when they leave our system. That becomes a guiding North Star for us. Once we know what that is, then we can start crafting our specific plans on how we can get to that North Star from where we are. There is a sense of urgency, but I am also respectful of what’s happened here in Houston, where we’ve been, and I need to know that and hear the voices of our community as well.

Defender: What is your plan to improve low-performing schools?

Carranza: There is no magic bullet. I also don’t call a school a failure. I call them historically underserved because at some point in history, every one of those schools was doing exceeding well, by somebody’s standard. So the question becomes what has changed so that the school went from being considered a “good school” to a school that needs some improvement.

A lot of that has to do with how historically we’ve served and supported those schools as communities and circumstances changed. Part of my plan is to actually spend some time walking the hallways, visiting classrooms, talking with teachers, administrators and community members.

I was blown away with the alumni association of Yates. On the very first day of school there was a group of people, right in that cafeteria, welcoming people to Yates. How do we harness that energy? That’s one piece of the puzzle. The second piece is understanding challenges like poverty, gentrification, lack of services.

Then there’s the question of whether zoning helps students at schools like Yates. Does program placement help? What about the facility? It’s understanding those dynamics, diagnosing the challenges, then collectively coming up with solutions. It may mean how we think about partnering with the faith-based community in a different way.

One size doesn’t fit all, and my concern has been that in my experience, in every state that I’ve worked in (this is now my fourth district and fourth state that I’ve lived in) there is a propensity to want to treat schools that have been historically underserved with the same blog brush. There is a prescription and we are going to implement it and then it’s going to get fixed. It’s going to take time and will require a very clear set of expectations.

Defender: The environment on the school board is contentious right now. Knowing what you’re dealing with, what’s your plan?

Carranza:  I’ve spent time meeting with board members, both collectively and individually. I truly don’t believe the narrative that they’re dysfunctional. They are all on the same page about wanting to do what’s best for kids. They just have very different points of view on how to get there, and what got us where we are. And they also have different communication styles.

Defender: Fifty-eight percent of Black males drop out and do not graduate. Studies show that if you could address Black and Hispanic male issues, you’ll solve a sizeable amount of the problems that we have related to dropouts. What are your thoughts?

Carranza: I’ve seen very specific curriculum, one called the “Manhood” curriculum and it was taught by Black men working with young Black men. It focused on the historical significance of men in a Black family. This is very powerful, because once you can empower a student with a strong sense of who they are connected to their cultural identity, then that student is less susceptible to the streets. We also need to be very careful about who we chose to partner with.