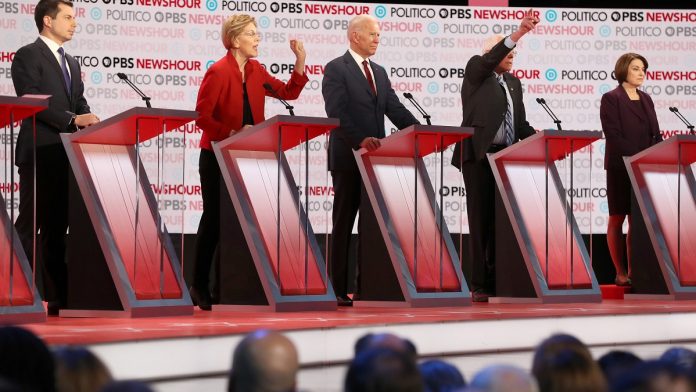 Tuesday marks the last time the leading Democratic presidential contenders will face a national audience on the debate stage before primary voting begins, making it the most significant moment of the 2020 primary season to date.

This week features the final debate before voting begins in Iowa, making Tuesday night the most important night of the 2020 primary season so far. It comes as the political world grapples with the fallout of the Trump administration’s military clash with Iran, the looming Senate impeachment trial and deep uncertainty about the direction of the Democratic primary. At this point, any one of the four top-tier candidates — Joe Biden, Pete Buttigieg, Bernie Sanders or Elizabeth Warren — has a legitimate chance to win the Iowa caucus.

Six Democrats will share the stage in the final prime-time clash before primary voting begins. Four of them are clustered near the top, while even the often-overlooked billionaire Tom Steyer flashed in the polls recently and Mike Bloomberg looms as a Super Tuesday force. The tremendous uncertainty means that any one of the candidates on stage Tuesday has the opportunity to change the direction of the race.

2. Is the political world underestimating Bernie?

In case you missed it, a certain 78-year-old white-haired democratic socialist was listed as the leading candidate in The Des Moines Register/CNN Iowa poll released late last week. That should be a wake-up call for anybody who doesn’t think Sanders can win the Democratic nomination — and we know you’re out there. Remember this: Every Democrat in history who has won both Iowa and New Hampshire has eventually become the nominee. And if the Vermont senator wins Iowa, he opens New Hampshire with a massive advantage. He won the state easily four years ago. A lot can happen in the next month, but don’t sleep on Sanders.

3. Can Biden exorcise the ghosts of Iraq?

It’s hard to believe, but almost two decades later Biden is still struggling to explain his vote to authorize the use of military force against Iraq. And last week’s military clash with Iran is only making it harder. Sanders, the only candidate in the field who was in Congress for the 2002 vote, attacked Biden’s vote on the issue over the weekend. Buttigieg, who was a 20-year-old college student during the congressional vote in question, has also hit Biden on Iraq in recent weeks. Foreign policy should be an asset for Biden, a former chairman of the Senate Foreign Policy Relations Committee and a two-term vice president, but it will likely hurt as much as it helps unless he can figure out how to move past criticism from both major political parties on the sensitive issue. The debate moderators, and his Democratic rivals, won’t let him off easy Tuesday night.

4. Will Democrats pay a price for their first all-white debate?

The debate will also be the first that features an all-white slate of candidates. Asian-American Andrew Yang was the only minority to qualify for the last meeting with all the black and Latino candidates having already been pushed out for failing to meet the Democratic National Committee’s fundraising and polling thresholds. The all-white debate comes less than a week before Martin Luther King Jr.’s birthday in an election cycle in which Democrats desperately need to energize minority voters — not a good look for the party.

5. Are things about to get nasty on the left?

Left-wing favorites Sanders and Warren have played nice with each other for virtually the entire 2020 campaign. Until now. Warren over the weekend said she was disappointed after news emerged that Sanders’ campaign volunteers were encouraged to question Warren’s ability to expand the party’s coalition beyond highly educated voters. Warren suggested that the Sanders campaign was trying to “trash” her. While Sanders downplayed the dispute, there are signs for the first time that all is not well on the party’s far-left flank. Given that only one of the two New England senators may get a ticket out of New Hampshire, this is a dynamic to keep a close eye on.

6. Will the other billionaire in this race be a factor?

Here at 2020 Watch we don’t put too much stock in single polls, but it was hard to ignore Steyer’s recent surge in South Carolina and Iowa. Sure, the bumps are likely the result of his massive advertising campaign, but that doesn’t make them insignificant. The political world has treated Steyer as an afterthought since the much wealthier Bloomberg entered the race, but Steyer is the only one of the two who will appear on the debate stage this week. If there’s one thing we all learned in the Trump era it’s this: Don’t count out the billionaires.

President Donald Trump is keeping his eye on the prize. As Democrats gather in Iowa, the Republican president will spend Tuesday night rallying supporters in what may be the nation’s most important general election battleground: Wisconsin. He opens the year with no serious primary challenge and more than $100 million in his campaign account. As their primary fight intensifies, remember that the real work has barely begun for Democrats in 2020.

CNN will co-host the debate with The Des Moines Register and broadcast the event live from 9 to 11 p.m. EST.