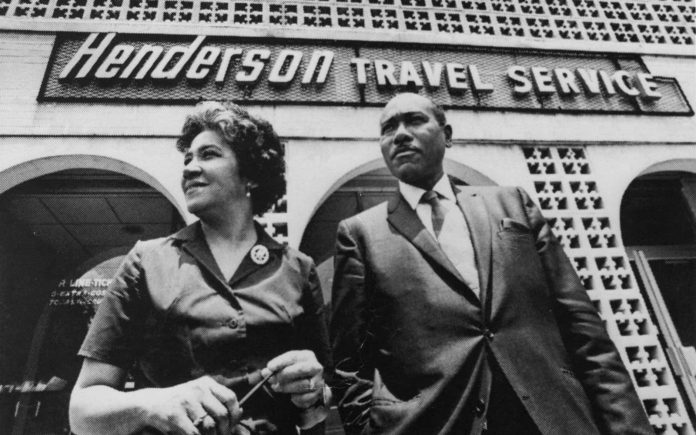 Before the current boom of black travel nomads and influencers, there were African-American pioneers who charted a course that would revolutionize the way black travelers traversed the world. More than 80 years ago, postal service worker and travel writer Victor Hugo Green had the foresight to create The Negro Motorist Green Book, a travel guide that was initially the go-to source for black American travelers. It featured a list of recommended hotels, restaurants, and gas stations that catered to black patrons when Jim Crow laws and racial segregation were prominent in the U.S.

Born in Harlem, New York, Green published the first edition of The Negro Motorist Green Book in 1936, printing 15,000 copies every year. In 1952, he broadened the scope of the guide to encompass travel beyond road trips by changing the name to The Negro Travelers’ Green Book.

In June, visitors to the National Civil Rights Museum in Memphis, Tennessee, will be the first to see a traveling exhibition dedicated to the Green Book. The exhibit will offer a look into Green’s vision to inspire African-Americans to travel as well as inform a community of the safe spaces across the country. “We’re calling out some really great Green Book business owners and their stories with video and interviews,” said Candacy Taylor, the curator and content specialist for the exhibit. “I’ve found and tracked down family members about artifacts, so there’s about 50 objects, including my photographs of the buildings and businesses today.”

Taylor’s new book, Overground Railroad: The Green Book and the Roots of Black Travel in America, will serve as the companion piece to the new exhibition, scheduled to make its way around the U.S. through 2024. The book chronologically traces the social mobility and history of African-Americans over the last century.

For the book, the cultural documentarian used her stepfather’s firsthand accounts of growing up in the segregated South, her own travels to dozens of businesses listed in the Green Book, and her experiences working with literary scholars and cultural critics, like Dr. Henry Louis Gates, Jr., an award-winning filmmaker and the director of the Hutchins Center for African & African-American Research at Harvard University. She poured all of her hard work into telling the story of a resilient community and culture.

“As much as black Americans have had so many challenges and hit so many really low points, it’s even in those low points that we’ve done incredible things,” said Taylor. “We have this incredible legacy.” And part of that legacy, listed in the popular travel guide, includes the black-owned and operated businesses, from restaurants that served incredible soul food to fabulous nightclubs where patrons could see music icons such as Billie Holiday.

One of the key figures in Taylor’s book is Victor Hugo Green, who was determined to provide African-Americans with the necessary tools to travel in the U.S., and eventually abroad. In 1949, Green expanded his travel guide empire and launched Reservation Bureau, in a partnership with Maher Travel Bureau in New York. The company offered trips to the West Indies, Bermuda, Europe, South America, and Africa. As advertised in the Green Book from 1949 to 1957, this new liaison was not only meant to encourage African-Americans to travel abroad, but also to provide an underserved community with travel logistics, from applying for passports and visas to booking travel via airline, railroad, and at the time, steamship.

The 1950s were hailed as the “golden age of travel.” According to Taylor’s book, international travel was becoming more popular within the black community. The airline industry became the new mode of travel, offering perks like being able to arrive 30 minutes before a flight and gourmet in-flight meals. As more black jetsetters traveled beyond U.S. borders, they quickly took notice of the positive greeting they received abroad, especially at a time when African-Americans were still fighting for equality. Langston Hughes wrote how “colored performers live normally as human beings” overseas. He and other lauded artists and entertainers, such as Josephine Baker, Louis Armstrong, and Ella Fitzgerald, felt accepted and received warm welcomes when visiting Europe.

In 1954, Freddye Henderson, who later founded Henderson Travel Service, the nation’s first African-American-owned travel agency, took a group of black female fashion designers to Europe. Much like the celebs, they raved to family and friends about their incredible travel experiences. “My mother shared with my father how easy it was to plan the trip, and also how well-received they were as Negro women in Europe. This was the impetus for opening the doors of Henderson Travel a year later,” said Gaynelle Henderson, Freddye’s daughter and the company’s current president.

For Freddye, the trip conjured an epiphany. She knew that if she spread the word about how African-Americans were being accepted abroad, they would travel overseas. In 1955, Freddye and her husband, Jacob, opened Henderson Travel Service in Atlanta to assist African-Americans who wanted to travel internationally. Coincidentally, it was also the same year that Rosa Parks refused to give up her seat on a bus in Montgomery, Alabama.

The agency planned and booked thousands of trips for black travelers, including Dr. Martin Luther King, Jr.’s visit to Oslo, Norway, where he accepted the Nobel Peace Prize for his leadership in the Civil Rights Movement. And Freddye tagged along, too.

During the agency’s early years, the Hendersons saw the potential of specializing in travel to Africa. In the 1950s, they wanted to plan trips to encourage travelers to explore the continent’s diverse, rich cultures. There were only a handful of travel companies offering services to what was then known as the “Dark Continent,” but this travel agency provided exclusive services, including chartering planes to West Africa, an area where there were no commercial flights. Their decision to focus on trip planning and tours to Africa would not only become a revenue generator for the company, but it would also serve an underserved travel market and forge valuable connections in the black community.

“We really had the advantage because our niche specialization was African tours,” said Gaynelle. “We had a well-known reputation because my parents, in particular, worked closely with almost all the major African-American professional associations during those early years.” Those social and professional organizations included the National Bar Association, National Medical Association, historically black colleges and universities, as well as black fraternities, sororities, and churches.

With their credibility in the travel industry and long-standing trust among African-American travelers, Henderson Travel Service didn’t escape a couple of changes in the 1980s – more than 30 years after opening their doors. In 1984, Gaynelle, one of Freddye and Jacob’s four children, opened a new office in Washington, DC. Meanwhile, the Atlanta office remained open with her parents still at the helm. However, in 1989, Henderson Travel Service closed in Atlanta, and the Hendersons passed the baton to their daughter to take over the family business.

From an early age, Gaynelle remembers learning the ropes from her parents. “I remember writing airline tickets with my sisters and brother. My mother would give us a list of names and a prototype of how to write the ticket with city segments, airlines, and departure times,” she said. “We would literally copy that ticket and just change the names manually in handwriting.” On the weekends, Gaynelle and her siblings would use a mimeograph to print out the travel information that their mother would mail out to clients.

From handwritten tickets to printed tickets to electric boarding passes, Henderson has seen it all. And as times have changed, the agency has transformed its mode of operations, too. As the new president of the agency, Gaynelle wanted to diversify the company to increase its revenue stream. So, she received her AA certification in Small Business Administration in hopes that the agency would be able to compete and bid for federal government travel contracts, especially now that it was based in Washington, DC. Initially, her hard work and valiant efforts were not able to get her a seat at the table, so she decided to expand the company to include conference management, which required similar skills, including logistics planning and booking.

In 1989, it would prove to be a smart move. “The first time we put a proposal together for a contract, we won it,” she said. “That happened to be a $1 million contract with Health and Human Services to plan and manage a series of conferences on AIDS and the minority community in different cities around the country.” From this lucrative venture, Henderson Associates was born as a new consultant division under the Henderson Travel Service brand. Creating another valuable revenue stream, it helped the agency survive difficult times and stay afloat during the Great Recession that occurred from 2007 to 2009.

Henderson Travel Service continues to bolster its reputation for specializing in tours in Africa, including their most popular tour destinations of Ghana, Senegal, and South Africa. Meanwhile, Henderson Associates focuses on federal government contracts and assisting other countries “in building their market shares.” It breathed new life into the company, providing more valuable partnerships and connections. In 1990, for example, Ghana Airways sought out Henderson and appointed her the national manager for North America to increase the number of African-American travelers visiting the West African nation.

And in 2001, Henderson Associates was awarded a contract to work with Bermuda’s Minister of Tourism, David Allen, on the African Diaspora Heritage Trail conference, where countries and people of African descent converged on the island nation to discuss how enslaved people have influenced their country’s or community’s history and culture.

Over the last decade, Henderson Travel Service has survived the increase of travel apps and online travel aggregators by banking on its well-renowned reputation and expanding its tours to group-requested destinations such as India, the United Arab Emirates, and Australia, while still managing a few Africa tours per year. Henderson believes people are still intrigued by Africa because it’s an unfamiliar travel destination. “People are just so uninformed about Africa that it really is a disadvantage in terms of travel planning. They don’t know where to start,” she said. “Some people are still uncomfortable about planning on their own, and I think it’s best to come to a specialist who can plan your travel to Africa.”

Celebrating 65 years in the travel business this year, Henderson Travel Service lives on through Freddye and Jacob’s daughter, as she and the agency continue to provide travelers with unique experiences in Africa. Henderson said she’s semi-retired and has been contemplating the agency’s next chapter. But for now, she’s focused on planning more tours and writing a book that her mother started, which will give travelers, historians, and culture documentarians a glimpse into the lives of an African-American family that became true pioneers in the travel industry.