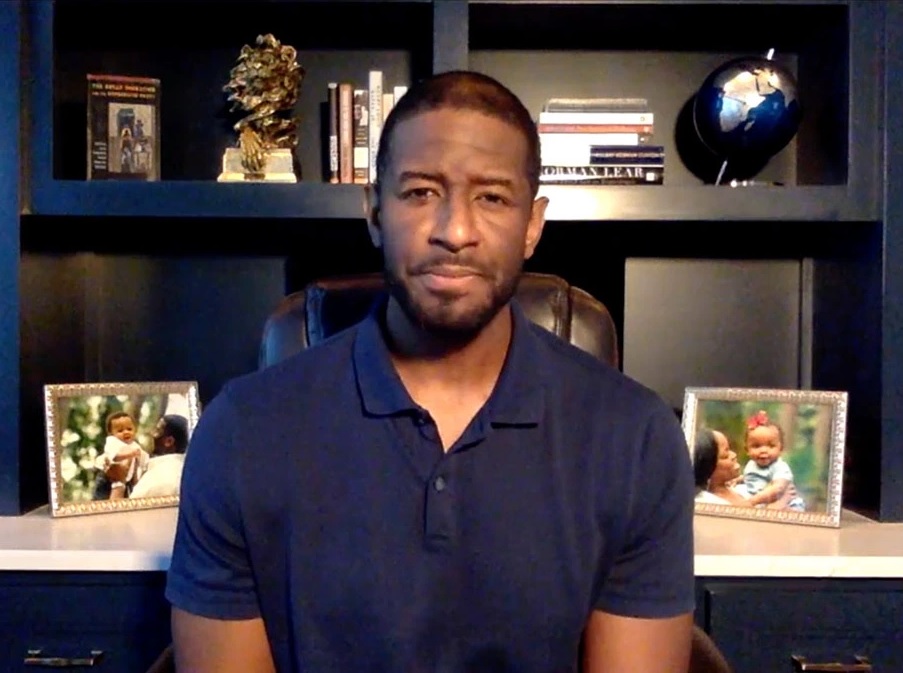 Andrew Gillum is opening up about going to rehab for alcoholism and seeking therapy for depression after his failed campaign to become the governor of Florida.

Gillum was once seen as a rising star in the Democratic party after launching a gubernatorial bid in November 2018 but lost to Ron DeSantis by half a percentage point. The former mayor of Tallahassee became the center of controversy in March after he was found half-dressed, drunk, and passed out in a Miami Beach hotel room with an acquaintance, Travis Dyson. Dyson had previously advertised his services as a gay male escort, according to Politico, and he suffered an apparent crystal meth overdose.

Gillum said it was a ‘wake up call’ and sought treatment. In an 11-minute video posted to his Instagram on Monday, he broke his months-long silence about his withdrawal from public life.

“I am thankful to so many of you who have wished me well during this especially challenging time,” he captioned the post. “I wanted to provide a personal update on how I have been doing. Take good care of yourselves during this season and I will see you on the other side. Warmest, Andrew.”

The uploaded video featured him expressing how he used alcohol to self-medicate following his election loss.

“I went away to rehab to focus on my issues with alcoholism, having grown up in a household where my father battled addiction to alcohol, and later died from that addiction,” Gillum said in the video. “I knew well the toll it took on my father’s dreams and ambitions.”

I am thankful to so many of you who have wished me well during this especially challenging time. I wanted to provide a personal update on how I have been doing. Take good care of yourselves during this season and I will see you on the other side. Warmest, Andrew

Gillum says he was surprised by his battle with depression and was in denial about his response to the unsuccessful gubernatorial campaign.

“I had totally underestimated what losing the race for governor had had on my life and on the way those impacts started to show up in every aspect of my life,” he said.

Gillium says he tried to numb his pain by using alcohol and simply ignoring the loss. Instead, he chose to pretend he was “living my best life” but after more than 16 years as a public servant, he started doubting his self-worth.

“All of that was all of a sudden gone, and caused me to think about my own purpose, and my own value and what I could contribute if anything,” he said. “I didn’t want to face any of those things so I numbed. I tried to suppress. I tried to ignore.”

The politico continued by stating that it “cuts you,” to know that his private battle became so public. He urged people not to suffer in silence.

“My stuff had to be public and cause great embarrassment and rumors, some false, some true, the shame that I felt from all of that … was tearing me up,” Gillum said. “I needed real help to try to unpack that.”

Gillum credited his wife R. Jai Gillum for standing by his side and that she “knows what I am and knows what I am not and she chooses to love me anyhow.”

He also shared his desire to be one of the voices at this critical time in history and how hard it was to not be able to. He revealed that his mother battled COVID-19 for a month. He referenced Black Lives Matter and how he believes demonstrators are on the front lines to ensure their lives are valued.