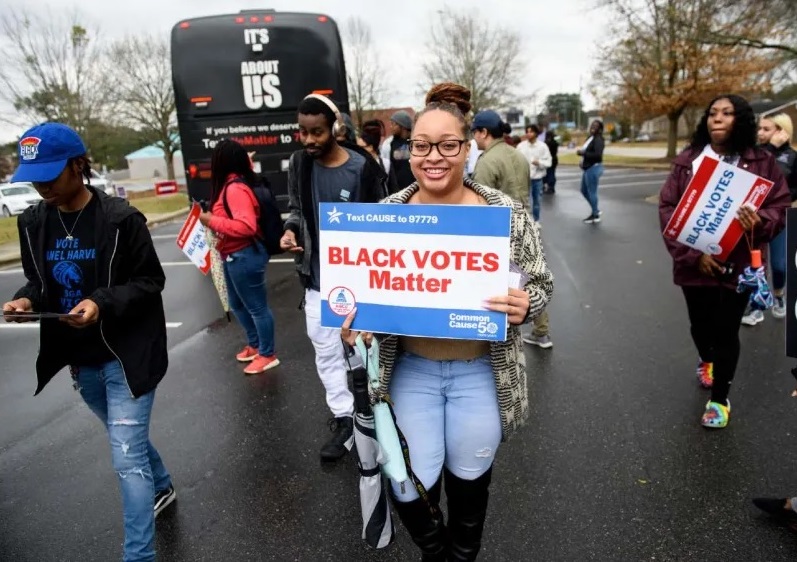 BET, along with the National Urban League and other key civil rights organizations, will hold the first-ever National Black Voter Day on September 18, 2020 to aid Black citizens against suppression tactics and ensure that their vote counts in the various elections taking place in November.

The announcement is part of BET’s #ReclaimYourVote campaign and comes exactly 100 days out from Election Day on November 3, 2020.

“The final stretch is always the most important part of any race, and with just 100 days until Election Day, there’s no time like the present for BET to go ‘all in’ with National Black Voter Day,” BET Networks President Scott Mills said in a statement. “We are rallying all the resources and relationships we have to mitigate the undeniable efforts being made to disenfranchise the African American community, a voting bloc ubiquitously understood to influence elections. We will use the current momentum of the fight against systemic racism to galvanize those marching in protest to march to the polls in November.”

Launched earlier this year, the #ReclaimYourVote campaign focuses on demystifying the voting process for Black citizens in the age of COVID-19. With the help of the National Urban League (NUL), the campaign will break down the necessary steps to make Black voices heard, including securing and checking voter registration, making a voting plan, and encouraging friends and family to vote.

NUL president Marc Morial said partnering with the iconic BET name will ensure the organization reaches as many Black voters as possible.

“We will be launching a grassroots effort in probably about a dozen cities to put people in the communities on the ground, using everything from canvassing, to organizing, to door-to-door leaf footing, and social media to register, educate and mobilize people to vote,” Morial told BET.com, adding NUL will use BET’s social media accounts to amplify the effort and educate voters.

BET will also launch a wave of content, programming, and initiatives leading up to National Black Voter Day to increase awareness of the collective voting power of Black Americans. Efforts will also be made to ensure that the long lines seen nationwide at polling places and disable or broken voting machines become a thing of the past.

Concerns about voter suppression, particularly in the Black community, have been a hotly discussed topic since a 2013 U.S. Supreme Court decision gutted Section 5 of the Voting Rights Act, which prohibited certain states and localities from making changes to voting laws without obtaining federal approval or “preclearance.” Section 5 has prohibited states from imposing stricter voter ID laws and redistricting maps that are disadvantageous to Black communities.

In 2017, Black people were four times more likely than their white counterparts to report experiencing racial discrimination when trying to vote or participate in politics, according to the Center for American Progress.

The long voting lines have been a concern for Morial, who called them “an orchestrated effort to suppress the vote to make it more difficult for Black people to vote.” He believes that voters should have all the information necessary about their state’s mail-in ballot and early voting options.

“We have witnessed attempts to exclude Black Americans from the voting process through the purging of registration rolls, restrictive voter ID laws and other forms of voter suppression, a legacy of Jim Crow,” said BET’s Chief Social Impact and Communications Officer Jeanine Lilburd.

Black voters’ issues have been further confounded by the coronavirus pandemic, leading to fewer precincts which must institute social distancing requirements with fewer poll workers and machines.

“People have had a double and triple wake-up call that our national leaders are failing us with COVID,” Morial said, adding the administration’s approach has been uncertain and contradictory. “People are dying every day because of steps taken at the national level. Instead, it’s been up to every governor and mayor to figure out how to do their own thing. People need to understand that who leads the country counts when we’re in a crisis. So, I think people are energized but are careful and concerned about their own health.” Morial also encourages voters to wear a mask and gloves as they head out to precincts this year and ensure they are practicing social distancing.

In addition to the National Urban League, BET’s partners for the #ReclaimYourVote campaign include the NAACP, Color of Change, When We All Vote, Black Voters Matter, NAACP Legal Defense Fund, The Collective PAC, Lawyers’ Committee for Civil Rights Under Law, Election Protection, The Leadership Conference on Civil and Human Rights, and The National Action Network (NAN).

“It has become clear that voter suppression is an integral part of the electoral strategy of some partisan political groups — there’s no end in sight to their ruthless disenfranchisement tactics,” NAN founder and president Rev. Al Sharpton said in a statement. “We must not allow these efforts to prevent us from exercising our Constitutional right to vote. 2016 proved in the most dangerous ways that elections have consequences, which is why 2020 is shaping up to be the most important election of our lifetime. I, along with the National Action Network, wholeheartedly stand with BET’s voter registration efforts through National Black Voter Day. The last few months have shown us that we are literally fighting for our lives.”

National Black Voter Day will focus on the campaign’s “Five Steps to Voting”:

Step 3: KNOW THE CANDIDATES AND ISSUES