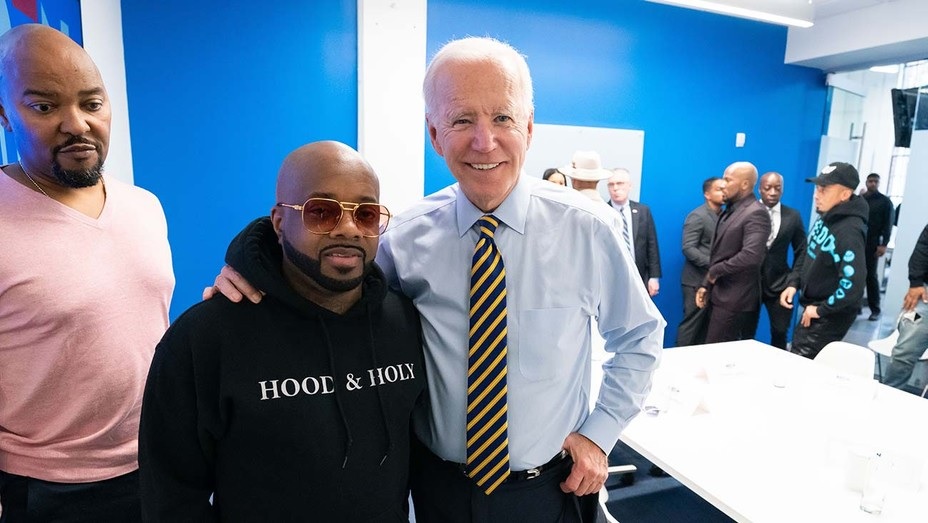 Joe Biden’s presidential campaign has tapped Ludacris, Monica, Jermaine Dupri and Jeezy to record “Get Out The Vote” ads focusing on Black voters in battleground states.

“It is really really important to make sure people don’t sit at home,” Dupri tells The Hollywood Reporter. “There are a lot of people I know that are still on the fence about voting, period.”

The 60-second ads will run on radio and on digital in key battleground states, with the talent imploring listeners or viewers to vote.

“If you’ve been out marching in these streets, exercise your rights. You now need to exercise you right to vote,” Ludacris says in one of the ads.

At the same time the campaign has also been expanding its “Shop Talk” discussion series, which aims to address the challenges facing Black men across the country. Panelists have included Dupri, actor Terrence J and Don Cheadle, among others.

“If there wasn’t a pandemic in place, the campaign would be in barbershops across the country, we would be there in person, talking to people, touching people’s hands, and having this dialogue,” Terrence J tells THR, adding that the dialogues the campaign put together are the next best thing. “For me, these conversations are incredible.”

“Our campaign is focused on meeting voters where they are with Joe Biden and Kamala Harris’ message to build back better, says the campaign’s director of strategic communications Kamau Marshall. “These events and new GOTV ads with various influencers reach a critical audience of Black voters that we’re hoping to turn out this election.”

Ultimately, the goal with both the ad campaign and Shop Talk effort is about getting voters to the polls. The celebrity supporters of the campaign seem happy to help however they can.

“We need all we can get to change the narrative, to change the situation of the United States of America,” says singer-songwriter Anthony Hamilton. “Want to be as loud as I can, as visible as I can. Whether it be speaking, singing, whatever I can do to bring people to a comfortable spot of acceptance.”

Dupri says that he was impressed by how seriously Biden is taking his outreach to the Black community recalling a meeting he took with the former vice president after the Democratic primary debate held at Tyler Perry Studios in Atlanta.