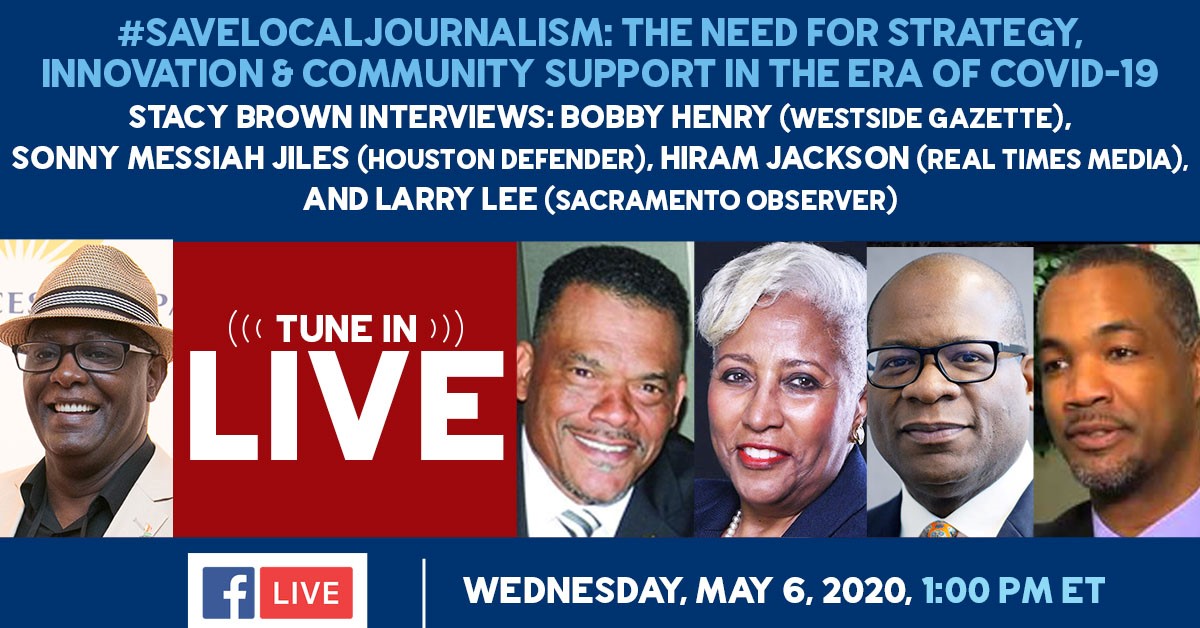 As conditions around the globe worsen because of the coronavirus pandemic, publishers of Black-owned community newspapers and media companies and their staffs are struggling to sustain business operations that enable them to deliver important news and information to their readers, listeners and viewers.

On Wednesday, May 6 at 12 noon CT, four publishers from across the country, including Bobby Henry of Florida’s Westside Gazette, Sonny Messiah Jiles of the Houston Defender, Hiram Jackson of Real Times Media (whose publications include the Chicago Defender and five other regional weeklies in the U.S.) and Larry Lee of the Sacramento Observer, will participate in a special livestream broadcast to discuss the status of their operations as the global COVID-19 pandemic rages on.

All four publishers and their media companies are members of the National Newspaper Publishers Association (NNPA), the trade association representing America’s Black press.

The broadcast will stream live over Facebook and YouTube and will include a lively and insightful discussion on the status of local community-based journalism. In particular, the panel will discuss the state and fate of Black-owned media companies.

As small business owners, these publishers faced significant challenges even before the economy took its current downward turn. However, there’s no secret that Black-owned small businesses have been essentially ignored when it comes to providing access to stimulus funding and small business loans.

Each of the publishers will discuss the vital role that Black-owned publications have served for the nearly two centuries (193 years) of the Black Press and why their role remains essential to the communities they serve.

Since the first issue rolled off the press in 1971, Henry’s Westside Gazette has maintained a high level of professional, insightful and reader-sensitive reporting that has gained the trust and respect of South Florida’s African American community.

The Houston Defender serves a city that’s home to nearly 1 million African Americans. Houston is consistently ranked as one of the top ten cities based on median household income, households earning more than $100,000 annually, business ownership, college graduates, and homeowners. Additionally, the city has enjoyed the lowest unemployment and home loan rejection.

At the leadership helm since 1981, Jiles has ensured that the Defender’s legacy as a publication that promotes the positive, analyzing problems and sharing solutions.

Further west, Lee’s Sacramento Observer is a past winner of the NNPA’s John B. Russwurm Award, which recognizes the Nation’s Top Black Newspaper. During its five decades of operation, the Sacramento Observer has been honored with over 600 local and national awards for journalism excellence and outstanding community service.

Tune in to view the livestream at 12 noon CT, Wednesday, May 6, over Facebook and YouTube. An archive of the stream will also be made available.