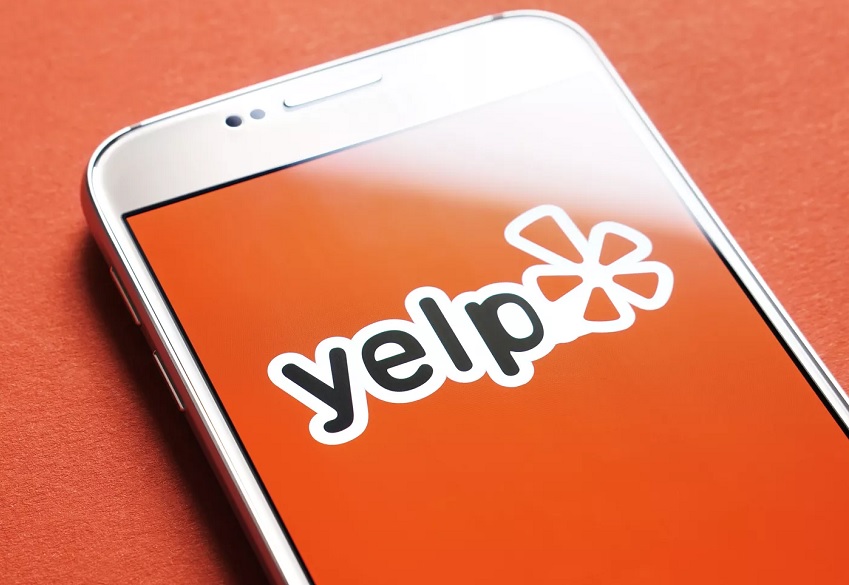 Americans are increasingly using Yelp to sound the alarm after encountering racist practices at businesses across the country.

In the months after George Floyd’s death under the knee of a police officer in Minneapolis, an increasing number of reviewers have warned fellow users of racist conduct at local businesses, Yelp says.

On Thursday, the platform announced plans to pick up where watchdog users left off with the launch of a consumer alert that flags businesses accused of racist behavior. The move is meant to give patrons “reliable” and actionable information while holding business owners accountable for their actions, the platform says.

“Now more than ever, consumers are increasingly conscious of the types of businesses they patronize and support. They are ‘voting with their dollars,’ so to speak,” said Noorie Malik, Yelp’s vice president of user operations. “We needed a better solution to inform consumers about businesses allegedly associated with egregious, racially charged actions to help people feel comfortable patronizing a business.”

Yelp’s new “Business Accused of Racist Behavior Alert” and other tools can serve innocent business owners and Yelp users alike. On one hand, the alerts can protect businesses from an avalanche of angry artificial reviews and the notices let consumers know what they might be up against before patronizing a store.

On Yelp, a business’s star rating can be artificially inflated or deflated by activists leaving reviews for stores they’ve never been to.

This type of scenario played out in 2012 after a pizza parlor owner hugged President Barack Obama and ignited social media responses from people on both sides of the aisle. Some posted one-star reviews on the restaurant’s page attacking the owner. Others left five-star reviews in his defense.

A similar incident occurred in 2018 after the arrest of two Black men at a Philadelphia Starbucks. 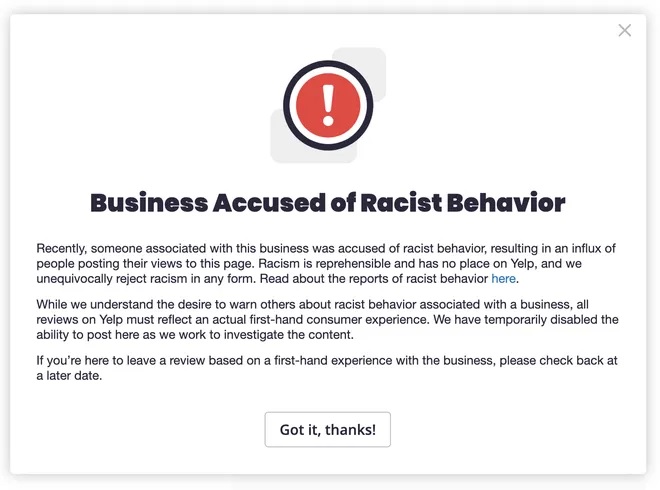 The new red icon alert on Yelp will appear on business pages that may have been impacted by situations where someone associated with a business used racist language or a racist symbol, Yelp says. And the platform will temporarily disable users’ ability to post content on pages that are under investigation until the attention dies down.

“We want to warn other people who may be coming to the business’s Yelp page that there might be reviews that aren’t based on first-hand experiences,” Malik said.

Businesses without a significant spike in reviews surrounding racism won’t be flagged. In those cases, consumers and business owners can report content they believe violates Yelp’s guidelines against hate speech.

For years, Yelp has placed “unusual activity” alerts on business pages that have received increased public attention, usually stemming from an onslaught of media coverage.

Between May and June 2020, there was a 277% increase in the placement of Yelp’s unusual-activity alerts, the platform says. A lot of that traction stems from reports of business owners or employees discrediting the Black Lives Matter movement, the app says.

“We’re often alerted of discrimination occurring at local businesses across the country on a daily basis and often in smaller towns where they may not even make the news,” Malik says.

Business pages that receive the accused racism alert will always include a news article so consumers can learn more about the incident, Yelp says.