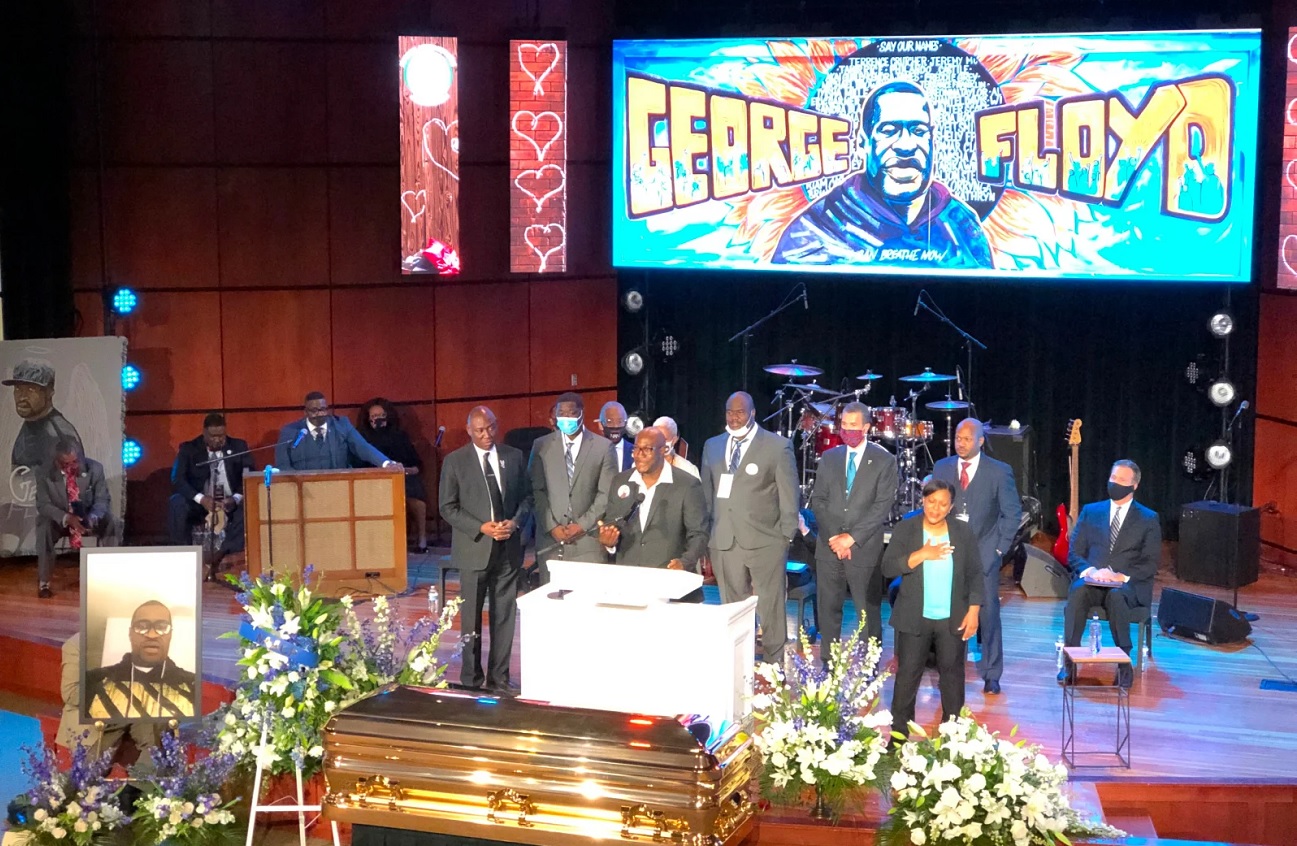 One of the most powerful moments during the memorial service Thursday for George Floyd occurred near the end of the ceremony as attendees stood in silence for 8 minutes and 46 seconds, the amount of time that former Minneapolis police officer Derek Chauvin kneeled on Floyd’s neck.

As mourners bowed their heads and dabbed tears from their eyes to the sounds of an organist playing in the background, the poignant tribute crystalized just how devastatingly long Floyd was held down.

“That’s how long he was laying there,” said the Rev. Al Sharpton, who delivered the eulogy during the 90-minute service.

The private memorial, held at North Central University, featured many high-profile guests, including the Rev. Jesse Jackson, Minn. Rep. Ilhan Omar, Mass. Rep. Ayanna Pressley, Marsai Martin, Ludacris, Tiffany Haddish, Kevin Hart, Ludacris, Minneapolis Mayor Jacob Frey and members of the Minnesota Vikings. The specter of COVID-19 hung over the proceedings as most of the attendees were in masks and according to the Star Tribune, had to have their temperatures checked before entering.

Members of Floyd’s family spoke and remembered the effect he had on people.

“Everywhere you go, you see people how they cling to him,” Floyd’s brother Philonise said. “They wanted to be around him….George, he was like a general. He walks outside and everyone wanted to greet him, wanted to have fun with him. Guys doing drugs and smokers, you couldn’t tell, because when you spoke with George, you felt like you was the president.”

Philonise reminisced about the family not having much growing up but just enjoying the moments they spent playing video games, sports and cooking with their mother. The youngest Floyd brother, Rodney, said George taught him “how to be a man because he was in the world already before us.”

Rev. Sharpton delivered a passionate eulogy for Floyd. “George Floyd’s story has been the story of black folks. Because ever since 401 years ago, the reason we could never be who we wanted and dreamed to be is you kept your knee on our neck. It’s time for us to stand up in George’s name and say, ‘Get your knee off our necks!’”

Gospel singer Hezekiah Walker also performed the song “Every Praise” towards the end of the ceremony.

Hundreds gathered outside of North Central University in a vigil honoring Floyd. As attendees exited the service, the people outside began chanting Floyd’s name and “If we don’t get no justice, they don’t get no peace.”

This was the first of several memorials taking place to honor Floyd over the next six days, according to the Associated Press. His body will be delivered to his birthplace of Raeford, N.C., where a private family service will be held on Saturday. On Monday, a public viewing will be held in Houston, where Floyd grew up and spent most of his life, followed by a 500-person memorial to be held on Tuesday. A memorial was also held today in New York City where Mayor Bill de Blasio attempted to give a speech but was drowned out by chants to resign.

.@NYCMayor trying to speak at the memorial right now. Drowned out by boos and calls to RESIGN. pic.twitter.com/ANIsCGFUyj

On May 25, Floyd died after Chauvin held his knee on Floyd’s neck for over 8 minutes. Last Friday, Chauvin was arrested and charged with third-degree murder and manslaughter. On Wednesday, those charges were increased to second-degree felony murder and charges were filed against Tou Thao, J. Alexander Kueng and Thomas Lane, the other three officers involved in Floyd’s death.

Demonstrations erupted in all 50 states and around the globe for more than week after Floyd’s death, and protests are ongoing in cities across the country, as activists call for police reform following the death of Floyd and Breonna Taylor, an EMT in Louisville, Ky., who was killed by police in her own home during a botched “no-knock” warrant.