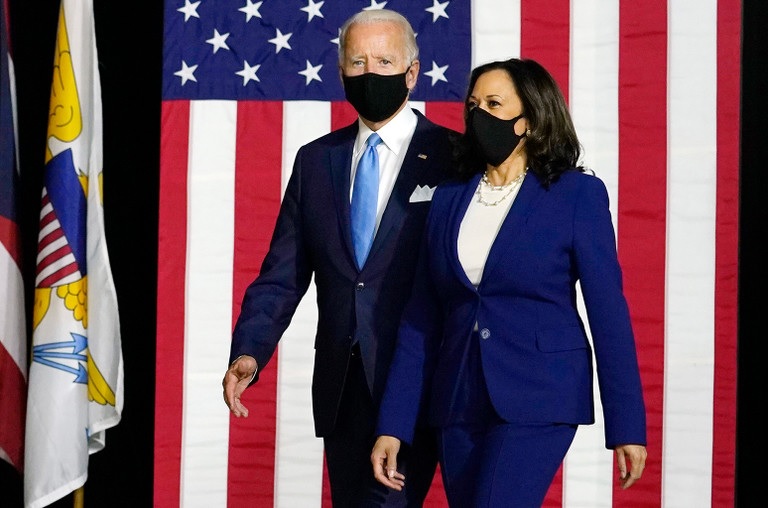 As the contentious race for the White House enters its most critical phase, a political action group composed of high-powered black executives and business leaders endorsed today former Vice President Joe Biden and his running mate, US Senator Kamala Harris for president and vice president, respectively. Making the first presidential endorsement since its inception two years ago, the nonpartisan Black Economic Alliance PAC will place its full support behind the Democratic ticket to defeat President Trump to ensure “strong leadership at this pivotal turning point in our nation’s history.”

BEA Executive Director David Clunie states in a release: “We have no doubt that Vice President Joe Biden has what it takes to heal our country and create a path toward a more inclusive and just America. He is the proven, dependable leader we need in the White House to put the nation on a new path toward equity and unity during these tumultuous and uncertain times.”

He adds that the Democratic presidential contender is aware of the need to “fundamentally change existing policies that have enabled the structural inequities due to racism to persist for decades. To achieve economic and social mobility, Joe Biden understands that we need to guarantee a living wage, close the Black-White wealth gap, invest in Black-owned small businesses, and expand access to capital.”

“We don’t ever want the impression or the thought to go out that African American issues are just police reform and criminal justice reform,” Richmond maintains. “Economic empowerment is a big deal and that covers a whole range of things from wealth creation, home ownership, entrepreneurship, all of those things. And the Black Economic Alliance digs into that tremendously. That’s their wheelhouse.”

The organization’s focus is driving economic progress for African Americans in three core areas – “work, wages, and wealth.” – through public policy, advocacy, and political engagement. Formed during the 2018 midterms, BEA has poured millions into campaigns and endorsed candidates in highly competitive races in which Black voter turnout will make the difference in outcomes.

To achieve its objectives, BEA has assembled a collection of powerhouses like board co-chairs Charles Phillips, CEO of tech colossus Infor, and N. Anthony Coles, chairman and CEO of biotech firm Cerevel Therapeutics as well as advisory board members Dick Parsons, former chairman of Citigroup; Carla Harris, vice chairman, Global Wealth Management at Morgan Stanley: and Susan Rice, former US Ambassador to the United Nations who had been considered for Biden’s running mate.

BEA most certainly will be critical in fundraising – reportedly, the Biden is expected to surpass a record-breaking $300 million for August – and black voter mobilization efforts given its ties to key civil rights organizations like the NAACP and National Urban League as well as other grassroots organizations.

Asserts Richmond: “Their leadership is phenomenal, and it’s been an ongoing relationship. So it’s not just an endorsement because we’ve been talking to them a lot to help craft policy, In fact, members of the group have “had a seat at the table” and have been aligned with the campaign’s “Lift Every Voice” Plan for Black America.

Clunie states that BEA is confident that a Biden Administration will reflect “the diversity of the United States, and he’s already made a strong first step in that direction” with the selection of Harris as his VP pick. Moreover, the organization will urge Biden, if elected, to appoint African Americans to top posts at key economic agencies, including the Treasury Department and Council of Economic Advisors to further push for an expansive economic agenda for Black Americans.