Members of Jacob Blake’s family made impassioned statements about justice, anger and peaceful protest at an emotional press conference in Kenosha, Wisconsin, on Tuesday afternoon, even as their lawyer said the young father was in emergency surgery and it would be “a miracle” if he walked again after being shot by police.

Julia Jackson, Blake’s mother, appealed for healing after violent unrest following peaceful marches that had splintered into episodes of arson and looting after curfew overnight.

“As I was riding through this city, I noticed a lot of damage. It does not reflect my son or my family. If Jacob knew what was going on as far as … the violence and destruction, he would be very unpleased,” she said.

Jackson spoke on Tuesday surrounded by family members and at least three lawyers who are now representing the family, including the civil rights attorney Ben Crump.

Moments earlier, Jacob Blake’s father, Jacob Blake Sr, wailed and had to be led aside as Crump spoke of the trauma caused to Blake Sr’s three young grandsons who were in the back of Blake’s car on Sunday evening, one of them celebrating his eighth birthday, when an encounter with police resulted in their father being shot in front of them.

Blake Sr said: “They shot my son at least seven times like he doesn’t matter. But my son matters. He is a human being and he matters.”

Crump said the circumstances leading up to the encounter with police are not yet clear, prior to what he called “brutal, excessive force” that resulted in Blake being shot in the back “at point blank range”.

He said Blake, 29, had been rushed into surgery “as we speak” and that his spinal cord had been severed by bullets and several vertebrae shattered.

“It’s going to take a miracle for Jacob Blake Jr to walk again,” Crump said, with another lawyer acting for the family, Patrick Salvi, saying Blake had holes in his stomach and had had much of his intestine removed, as well as suffering liver and kidney damage. 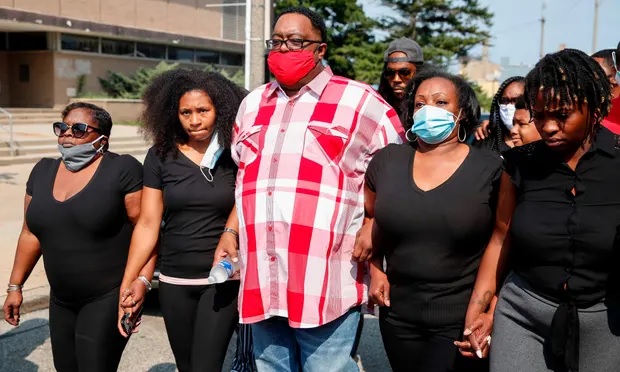 The press conference was held close to downtown Kenosha, a small city of around 100,000 people, 40 miles south of Milwaukee and not far from Chicago, on the shore of Lake Michigan.

The family and the lawyers spoke outside the courthouse, about two blocks from damage to other municipal buildings that was caused by unrest on Monday night.

Julia Jackson added that she had a brief visit with Blake in hospital earlier in the day, during which her son cried and said he was sorry to put the family into such a difficult situation, while she told him not to apologize for having been shot.

She then said: “I have been praying for the healing of our country … I have beautiful brown skin, take a look at your hand and, whatever shade it is, you are beautiful as well.”

She added: “God did not make one kind of tree, or flower, or fish … how dare you ask him to make just one type of human who looks like you. I’m not talking just to Caucasian people … no one is superior to another.”

“I’m not sad, I’m not sorry, I’m angry and I’m tired. I have not cried one time, I stopped crying years ago. I’m numb – we have been watching police kill Black people for years,” she said, adding: “I don’t want your pity, I want change.”

Although Blake is still fighting for his life in hospital, Widman referred to police killings of Black American men and women in recent years, and also reached further back in history.

She said that “this has been happening to my family for a long time, it happened to Emmett Till. Emmett Till is my family”, referring to the 14-year-old boy who was kidnapped, tortured and murdered by racists in a lynching in Mississippi in 1955.

Blake’s younger sister, Megan Belcher, wept and said she just wanted her brother with her.