A juror in the Breonna Taylor case contends that the Kentucky attorney general misrepresented the grand jury’s deliberations and failed to offer the panel the option of indicting the two officers who fatally shot the young woman, according to the juror’s lawyer.

The unnamed juror filed a court motion on Monday seeking the release of last week’s transcripts and permission from a judge to speak publicly to set the record straight. Hours later, the office of Attorney General Daniel Cameron granted both requests, saying that the juror is free to speak and that recordings of the session will be made public.

“This is something where the juror is not seeking any fame, any acclaim, any money,” said Kevin M. Glogower, the juror’s lawyer.

Mr. Glogower said the juror came to him last week in a state of turmoil after Mr. Cameron repeatedly said at a news conference that the law did not permit him to charge Sgt. Jon Mattingly and Detective Myles Cosgrove, the two white officers who shot Ms. Taylor, a Black woman, after one officer was shot by her boyfriend — and that the jury had agreed with him.

“While there are six possible homicide charges under Kentucky law, these charges are not applicable to the facts before us because our investigation showed — and the grand jury agreed — that Mattingly and Cosgrove were justified in the return of deadly fire after having been fired upon,” Mr. Cameron said, one of several moments in the news conference where he emphasized such a consensus.

According to Mr. Glogower, the juror was unsettled by the fact that the grand jury was not given an option of charging the two officers at a time when the community has been roiled by demonstrations seeking their indictment. The 12-member panel was presented only with possible charges for Detective Brett Hankison, who was fired in June. 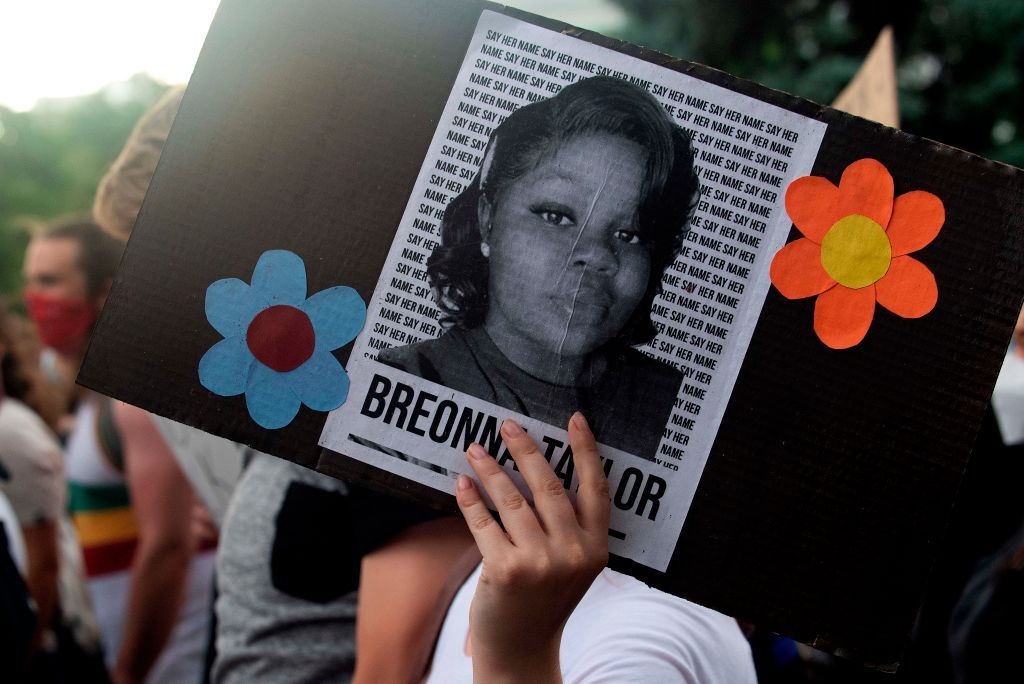 Mr. Hankison was accused of behaving recklessly when he ran into the parking lot and began shooting through Ms. Taylor’s covered patio door, his bullets flying into a neighbor’s apartment. The grand jury concluded that he had no self-defense claim but that he could not be charged with murder because he did not strike Ms. Taylor; he was charged with three felony counts of wanton endangerment.

Before the charges were announced last week, the city enacted a state of emergency, expecting mass protests. Courthouses shut down and businesses recorded voice mail messages apologizing to patrons for the unexpected closure. More than 200 protesters upset with the decision and demanding justice have been arrested, with some smashing windows and setting fires. One protester fired a gun at least nine times and wounded two police officers.

But legal experts had warned that Kentucky’s vigorous self-defense laws made it unlikely that Sergeant Mattingly and Detective Cosgrove would be indicted on murder charges because Ms. Taylor’s boyfriend, Kenneth Walker, had fired first during the police raid on her apartment. He had mistaken the officers for an intruder when they breached the door.

“We have no concerns with grand jurors sharing their thoughts on our presentation because we are confident in the case we presented,” Elizabeth Kuhn, a spokeswoman for the attorney general, said in an email on Monday night, adding that her office would release the recordings of the deliberations by Wednesday.

Ms. Kuhn said no charges could be recommended for those two officers because the investigation had concluded that their use of force was justified.

“Our prosecutors presented all of the evidence, even though the evidence supported that Sergeant Mattingly and Detective Cosgrove were justified in their use of force after having been fired upon by Kenneth Walker,” she said in an email. “For that reason, the only charge recommended was wanton endangerment.”

One longtime criminal defense lawyer, Ramon McGee, said the question of which charges the attorney general presented to the panel was not problematic.

“That is an incorrect assumption on how the grand jury process works,” he said. “Prosecutors make the decision on what witnesses are called, which evidence is tendered and what charges to recommend,” he said.

But the transcripts should be released, Mr. McGee added, because how the attorney general portrayed the process in public was potentially an issue.

Advocates for Ms. Taylor point to the juror’s complaint as evidence of a broken process, which started with the raid and included the release of an incident report that claimed the dead woman had not been injured. Despite a $12 million settlement from the city of Louisville in a wrongful-death lawsuit, Ms. Taylor’s mother said that nothing short of indicting all three officers would amount to justice.

“This just compounds the trust issue,” said Christopher 2X, a community organizer who was with Tamika Palmer, Ms. Taylor’s mother, last week when the attorney general told her the officers would not be charged. She broke down crying, he said.