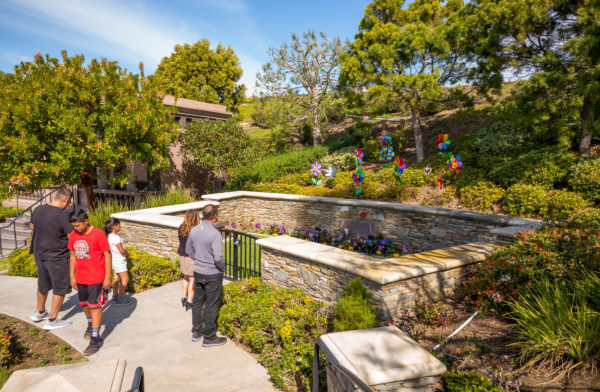 A California cemetery is getting slammed with visits by Kobe Bryant mourners, but the problem is folks are paying their respects at the wrong gravesite.

A correction on the death certificates issued for Bryant, 41 and his 13-year-old daughter Gianna after the Feb. 7 funeral, changed their gravesite location from Pierce Brothers Westwood Village Memorial Park in Los Angeles to Pacific View Memorial Park, USA Today reports.

But the private plots where folks are leaving their sentimental offerings at the Southern California cemetery are the wrong ones, a media relations specialist for the cemetery told USA Today Sports on Wednesday.

“We can confirm that is not Kobe and Gianna’s resting place,’’ according to Ashley Bunton of Service Corporation International, the owners of the cemetery. “We cannot divulge any additional details as to where they are. But we can tell you that is not the correct location.’”

While it was first believed that Pacific View was not where Bryant and Gigi were buried at all, it seems that the cemetery is where they are located but mourners don’t know where the exact plots are, and Pacific View, of course, won’t give up details on the whereabouts of the plots.

“Just a lot of people coming wandering the cemetery and looking to see if they can locate the burial site,’’ she said. “They’re just having to monitor things that are going on there.”

Bunton said a news outlet actually posted a picture of a certain gravesite at Pacific View on Friday, which resulted in hundreds of fans pinpointing that plot as the location of Bryant and Gigi. But it was incorrect and did nothing more than send an influx of people their way, Bunton said.

That report literally sent about 400 Bryant fanatics streaming over to Pacific View to pay homage to Bryant and Gigi, bearing gifts of flowers and memorabilia to leave behind, Bunton said. Also, it just so happens to be a coincidence that some plots have gold and purple flowers, but it doesn’t mean they belong to Bryant and Gigi, she said.

The confusion has led to people walking aimlessly around the cemetery searching for Bryant and Gigi and disturbing the peace of other families visiting their deceased loved ones.

“Others have actually run into the family members who’ve kind of shooed people away from that spot just because it’s disturbing the peace to the person interred there,’’ she said.

In the meanwhile, Pacific View said it has beefed up security because of the extra wanderers.

Bryant’s public memorial is slated for Feb. 24 at the Staples Center.

The Celebration of Life for Kobe and Gianna Bryant will air live on ESPN, the ESPN app and ESPN Radio at 1 p.m. ET.