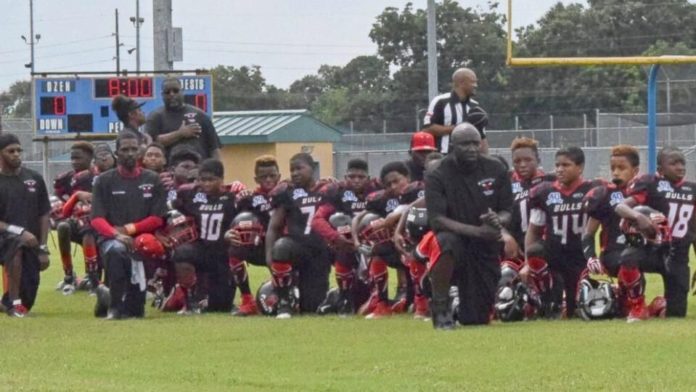 When the Beaumont Bulls, a little league football team, decided to take a knee at a Sept. 10 game, the response was swift — and vicious.

Hate mail poured in from people who were outraged that the all-Black team and its coaches had refused to rise during the national anthem. Some people called the 11- and 12-year-old players racial slurs and even threatened to have them lynched and burned.

In the face of all that, the Beaumont Bulls executive board stood behind them. So did the Bay Area Football League, which the team is part of.

Within a week, however, on the eve of the next game, things began to unravel. Tensions erupted between coaches, parents and league officials. Shortly after, players began to drop out.

Now, a little more than a month after the team’s protest, the league has canceled the team’s remaining games. The reasons behind the decision are in dispute. The league’s athletic director said the season was cut short because too many players left. The head coach, however, has suggested that it all stemmed from the protest.

It’s the latest controversy to rattle an athletic club in the weeks since San Francisco 49ers quarterback Colin Kaepernick took a knee during a preseason game in protest of racial injustice and fatal police shootings in the U.S. Athletes from professional teams all the way down to the junior level have joined him, igniting provincial battles over whether it’s offensive or improper for players to mimic his display.

The Beaumont Bulls’ decision to kneel during the anthem was not the work of just a couple wayward players. After mulling Kaepernick’s protest in September, the team’s players and coaches agreed that they would all take a knee at the Sept. 10 game, according to Bleacher Report, which spoke to the team.

But before they did, they asked for permission from the league and the Beaumont Bulls executive board.

When the hateful messages and death threats came in, team and league leaders backed them.

“It is our hope and desire to cultivate young men that will be leaders in our communities that will make a difference in this world,” the Beaumont Bulls executive board said in a statement a couple of days after the game. “And though their stance was not seen by all as a sign of progress, we believe that it was and we will continue to support them.”