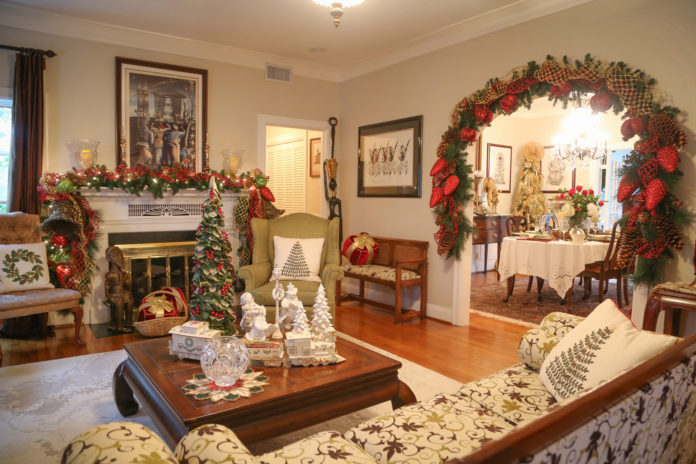 For more than half a century, the Blue Triangle Garden Club (BTGC) has spread holiday cheer with its annual Christmas Tour of Homes. That tradition is under attack according to club president Bola Patrick, because of a new, competing home tour created for a different purpose.

This year’s BTGC event on Dec. 10 from 1-5 p.m. will be its 56th, again raising funds to support the Blue Triangle Community Center. Proceeds will go toward restoring the center’s John Biggers mural that was damaged during Hurricane Harvey.

But Patrick and other BTGC members see another home tour event on Dec. 3, sponsored by the Historic Riverside Terrace Civic Association, as undermining their traditions.

“This new home tour, which seems to be more about selling houses than showcasing and serving our community, is creating a lot of confusion and impacting ticket sales,” Patrick said.

“Hurricane Harvey severely damaged the Blue Triangle Community Center and the Biggers mural. We need a strong turnout for our tour so we can raise money for the mural restoration and building repairs.”

According to Damali Hill, Historic Riverside’s event is disrespectful and unethical.

“Their event is masquerading as a home tour when it is really an open house attempt to sell homes; an open house that they are charging admission to,” Hill said. “Three of the [five] tour homes are for sale with two of those three properties represented by listing agents serving on the board of the new civic group.”

“What essentially they’re doing is charging people to attend an open house. Realtor friends told me it’s unethical but not illegal. I’ve never heard of a realtor charging a fee,” added Patrick, who first learned of the HRTCA event from a friend who saw it posted on Eventbrite and mistook it for BTGC’s annual affair.

HRTCA registered as a state nonprofit in March by Rachel Paxton, a real estate agent and home remodeler. Paxton, according to Patrick, attended last year’s BTGC home tour and invited BTGC members to an open house for a home she remodeled to sell tickets for last year’s event.

Patrick appreciated the gesture, but not the response from the HRTCA when she requested they cancel their Dec. 3 event or reschedule it so as not to compete with theirs.

According to HRTCA president Monica Davis, BTGC was especially contentious during a HRTCA board meeting, painting a “heinous picture” of the HRTCA, and rejecting all efforts to come to a compromise.

Patrick confirmed BTGC received several options from Davis but said they were rejected because BTGC felt they were being used to legitimize the newer association, and that they never show homes that they know are for sale.

Patrick charges the HRTCA’s name is misleading because Riverside Terrace has not been declared a historic district by the City. She also says though HRTCA’s president is Black, it’s really run by white realtors Paxton and Veso Kossev. Davis claims BTGC used a “cease and desist petition” as a Super Neighborhood meeting sign-in sheet, a claim Patrick denies.

“We have two realtors on the board of nine board members,” Davis added. “Their voice counts as two of the nine. I don’t know how that constitutes them running it.”

Davis noted HRTCA’s upcoming board elections on Dec.7 at Good Hope Missionary Baptist Church at 7 p.m. as an example of the group’s openness to the community.

As it stands, both groups are moving forward with their home tour events.

“We started organizing for our event in September,” Davis said. “Had we known there was a conflict, we would have chosen another date. We did indicate to Bola, even though our tour is going forward, we will never have this conflict again.

“We pledged we would not schedule anything close to their events moving forward. But this year, with our commitment to our home owners, vendors, sponsors and people who have already bought tickets, we are hard-pressed to cancel our tour.”

Though Davis attributes the scheduling conflict to the errors of a newly formed organization that has apologized repeatedly, Patrick sees the HRTCA home tour as an example of gentrification and is urging the community to proactively support BTGC’s event by getting the word out, and remembering “the Blue Triangle tour is always the second Sunday in December.”

Formed in 1937, the non-profit BTGC was originally an affiliate of the Blue Triangle YWCA, and is the oldest African-American garden club in the state.