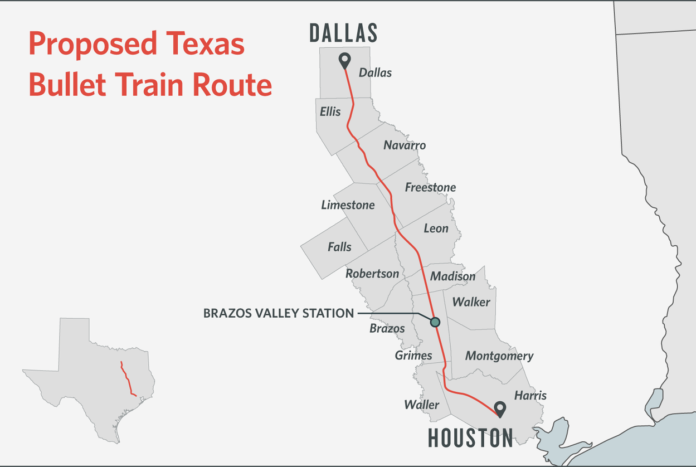 Federal officials narrowed the possible paths for a Dallas-Houston bullet train down to one likely route Friday, providing an unknown number of rural Texans the most definitive answer so far as to whether their land will be in the path of the controversial project.

Much of the planned route had already been largely solidified. But documents released Friday by the Federal Railroad Administration filled in the rest of the gaps, favoring a more westerly route that runs through Navarro, Freestone, Leon,  Madison and Limestone counties. Another potential route that was dropped from consideration would have avoided Limestone County.

Countless landowners in the rural counties between Houston and Dallas had been waiting to see where the line will likely go as it moves through their areas.

The potential route identified Friday was part of an draft environmental statement that details impacts of the project in particular areas. Texas Central Partners, the private company developing the project, will now present the draft publicly and allow Texans to weigh in on the proposed path. That is expected to happen next year.

“We will respectfully follow this public consultation process to ensure legitimate concerns from all stakeholders are addressed,” Texas Central CEO Carlos Aguilar said in a statement Friday.

The release of the draft Friday marked a major step toward getting federal clearance for the project. While it provides a clearer picture of the expected route, the path could slightly change in some areas as development and federal oversight continues.

The study also provided new details about stations planned in Grimes County and Houston. The Grimes County station is planned for State Highway 30 between Huntsville and College Station. There are three potential Houston station locations: land where Northwest Mall currently sits, an industrial area across from that shopping center and an industrial area closer to the nearby Northwest Transit Center.

Texas Central promises to run high-speed trains that would travel up to 205 mph as they carry people between the state’s two biggest urban areas in 90 minutes. The high-speed rail project will require the developer to buy up thousands of properties across the state.

Even though Texas Central leaders have long said they hope to work out voluntary land deals with all landowners along the line, much of the opposition to the project centers on the private company’s claim that it has the legal authority to condemn private property if needed.

Many officials and landowners disagree with those claims and have pushed local ordinances aimed at stopping the project. But urban business and elected officials have cheered the project, which they say will transform how people travel between the two regions.

Texas Central plans to finance the project, expected to cost more than $12 billion, with private investments and possibly federal loans. But the company has long said it will not use any state funds.

Lawmakers in the past two legislative sessions filed several bills aimed at killing or hampering the project. The bullet train survived both largely unscathed. But opponents, like Leman, say legal questions remain over whether the company can use eminent domain.

The libertarian Reason Foundation predicted earlier this year that Texas Central’s project would not be financially viable and would leave taxpayers on the hook for billions of dollars.

But Texas Central says it has spent millions on research that shows there is enough demand for the project to succeed. It has also released a study that showed the project would increase tax revenues for several cities, counties and school districts.