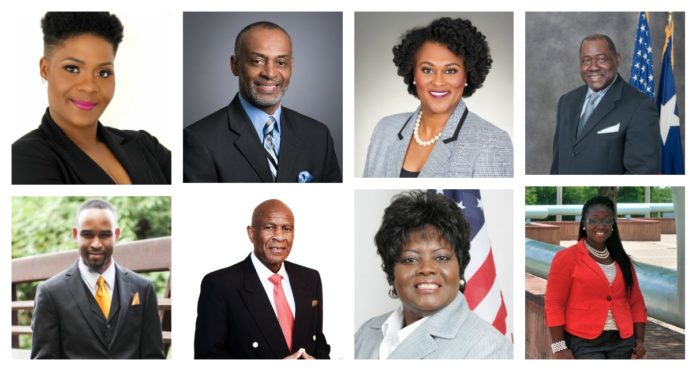 The race is on for the District K City Council seat formerly held by the late Councilman Larry Green. Nine candidates are running in the special election, which will be held on Saturday, May 5. The term runs through 2019.

Larry Blackmonis a retired educator. He is an appointee to HISD’s Project Advisory Board, overseeing bonds for construction of the new Yates High School, and an active member of the Yates Alumni Association. He sponsored the Mayor’s Youth Council from 1994 to 2006.

Martha Castex-Tatumis director of Constituent Services for District K and has advocated for seniors, small business owners, youth, economic development and beautification. She was the first African-American woman elected to the San Marcos City Council and served as deputy mayor pro tempore.

Carl David Evansis an associate with White-Orugboh and Associates Certified Public Accountants and a licensed minister.He has twice been elected president of the Fort Bend Houston Super Neighborhood Council 41 and designated representative for the Chasewood Community Improvement Association.

Anthony Freddieis a former City of Houston employee. He was assistant to Mayor Lee P. Brown’s chief of staff and chair of the Super Neighborhood Alliance. He served as assistant to the airport manager and with the Houston Police Department. His involvement includes Northeast YMCA and NAACP.

Elisabeth Johnsonis a Texas Southern University graduate student and author of “Wake Up: A Despairing Cry to the Black Community.” She is a Houston Black American Democrats board member and Houston Justice Coalition vice president. She worked on Bill White’s gubernatorial campaign.

Lawrence McGaffieis an Army veteran and ordained minister who has served as an associate/outreach minister and youth leader. He served as director of community engagement for the MLK Association of Houston. He founded Inspire the Lead and is a volunteer with God’s Food Pantry.

Aisha Savoyis employed with the City of Houston Office of the City Engineer, Floodplain Management Office. She served as a staff member for former Councilmember Sue Lovell. She has worked with victims of Hurricanes Katrina, Ike, Rita, Harvey and other disasters.

Gerry Vander-Lynhas worked in various capacities in multiple sectors including social services, finance, and non-profits. She said she has never run for public office before now, choosing instead to support others in that endeavor. (She did not provide a photo).