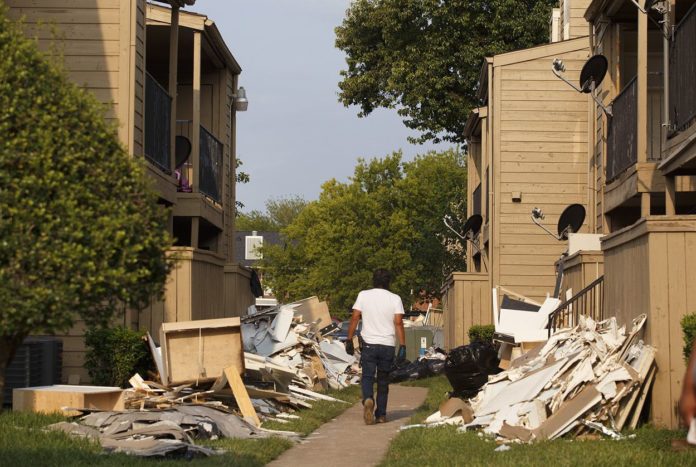 More than 1,300 Texans displaced by Hurricane Harvey were dropped Tuesday from a Federal Emergency Management Agency program that pays for hotel rooms while people find new places to rent or figure out how to repair homes they own.

The decision affects Texans who rented before the storm more than it impacts those who own their damaged homes. That’s because owners who are making efforts to repair their homes were given an extension through May 31. When it comes to the renters still left in hotels, FEMA officials said that Harris County now has “adequate renting resources” available.

“If you have been working on a plan with FEMA and FEMA partners on the next step of recovery, then there are ways to move forward and receive assistance,” said FEMA spokeswoman Lauren Hersh. “There are a number of terms and conditions FEMA has for staying in the program, and they are made aware of that in the beginning. That includes finding a plan of what to do next.”

Housing advocates took issue with FEMA’s decision to allow homeowners to remain on the program while deciding to remove people who had been renting property before the storm.

“We are very much of the belief that renters are left behind during disaster recovery, and this is just another example of that,” said Christina Rosales, a spokeswoman with advocacy group Texas Low Income Housing Information Service.

In Harris County, 650 homeowners remain in the transitional sheltering program, and there are still 6,764 total applicants left in program that were displaced from a wide swath of southeast Texas because of Harvey, Hersh said.

Hersh said her agency uses a number of factors to determine if someone should be dropped from the program, including whether housing is available for rent in the county and if the person has declined housing options from the Texas General Land Office, which is overseeing some short-term programs that FEMA historically administered.

FEMA began notifying people they would need to leave their hotel rooms last Thursday, according to an agency press release. FEMA stopped paying for hotels for 1,178 people in Harris County, 56 people in Brazoria County, 35 people in Montgomery County, 33 people in Nueces County and 16 people in Fort Bend County, Hersh said.

Rosales said FEMA was mischaracterizing the situation for many of the renters that were benefiting from the hotel program.

“I don’t think they are understanding this, or they aren’t counting, but a lot of that housing is not affordable for low-income people,” she said. “They’re people who need a place to live and haven’t been able to find something they can afford.”

Rosales also had concerns over the location of the property available for rent in a county as large and populated as Harris, saying the apartments might not be available in the community where displaced people lived before the storm.

“We’re not just talking about financial resources that people might not have,” she said. “It’s about the richness of the community where they’re from. You can’t blame somebody for wanting to go back to the community they are from, and it sounds to me like if there are no options available in their community, they’re out of luck under FEMA’s process.”

FEMA does not keep track of the location of rentable property, only the number of units available, Hersh said. Market experts at Apartment Data Services could not be reached for comment Wednesday.

Hersh said that FEMA provides the funding for housing, but prefers for local governments to handle the finer points of housing locations within the counties.

“We realize this voucher program may have not gotten all the information they needed, and some of them may be still be in dire straits,” Bernstein said. “There is a safety net in Houston. We do care about these people. We’re not against or for what FEMA did, but we’re not the ones who did it.”