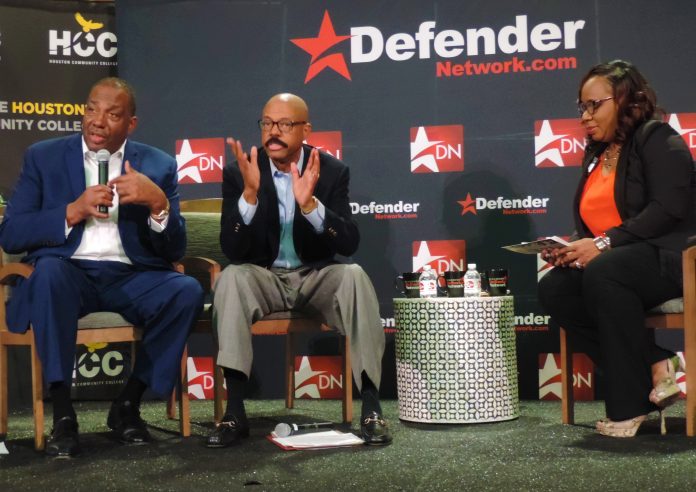 The 86th Texas Legislature runs from Jan. 8 to May 27. Lawmakers are tackling everything from the state budget to public education to health care and more. At the center of it all — Texas’ only two African-American lawmakers.

View video excerpts from the event.

Defender: Texas ranks 37 in public education and 27 in teacher pay in America. In 2011, legislators cut public education by $5 billion. How do you plan on fighting for those dollars that were cut and ensure our public schools are fully funded and teachers are compensated and what role does property taxes play in that rebuilding?

Borris L. Miles:We take a firm stand, don’t talk to me about property taxes until you can properly finance our public school system. We have to repair that 2011 budget. We’ve been putting back a little at a time, but it’s not enough. So right now, we are working on formulas for school finance. That is the most important thing right now, just for an urban community like ours, but for rural Texas as well. We had a school in Rio Grande Valley that had so much extra money under the Robin Hood program, they built a waterpark on their campus, while we’re here in HISD struggling to pay teachers and having enough resources. The formula is broken.

Royce West:You have to be able to work with both parties to make a difference. Until we do something about funding our public schools, property taxes is a non-issue. And when we finally do that, we have to make sure its sustainable. It makes no sense to have the state put in 30-35 percent of the money to fund our public system and the rest of it is being shouldered by local districts. We never anticipated that HISD or Dallas ISD would have to give back millions of dollars through recapture to fund other districts in Texas. We have to do something about the structure. So over the past year, a commission has been looking at public school financing and we came up with a list of recommendations, which will ultimately be placed in a bill for our consideration. After that, the Texas Education Agency can look at how it will impact various districts.

Defender: Both of you have initiatives designed to help Black males. Sen Miles, your TexStars program has given over 100 scholarships to African American men. Sen. West, your Dr. Emmett J. Conrad Leadership Program has provided college students from Senatorial District 23 with paid employment in their respective fields of study. What other efforts are underway for Black males.

Miles:We’ve identified that if you raise the bar for African American boys, rising waters will raise all boats. But we have to focus on them because they historically and repeatedly test at the bottom on every standardized test. They’re always the highest rate of state suspensions. I’m proud to say next month will kick off my $6 mil program at Wheatley, Kashmere, Worthing and Jack Yates, where 40 boys at each school will enter into a Posse Program, where they’ll move on the 9-12thgrade in each class. Their parents will sign contracts. The school will sign and we’ll move all 120 boys through the system and onto college.

West:We believe that success should up to the person in the mirror. We need to take away all the excuses – my mama don’t love me, my daddy wasn’t there, I can’t get anyone to love me. We’re trying to take away all of the excuses in terms of failure to succeed. I’m developing a public boarding school with a STEM focus and bringing in outside industry to feed into the program to make sure the kids not only have the theory in the classroom, but also be in a boarding school at least five days a week, that has mentors that will expose them to areas of STEM.

Miles: I exist because I was given a second chance. I filed a stack of bills on second chances. One is the Comprehensive Second Chance bill to cut time and seal with the records for nonviolent offenders. Some of the things we did growing up in school, the kids today do it, they’re in the criminal justice system. We need to seal their records so they can become productive citizens.

West:. There is a bill that was passed last year called the Community Safety Education Act (SB 30). It was in response to a lot of the shootings where Black males were shot by police in traffic stops. We recognize that you have to come up with a balanced solution. It took effect Sept 1, 2018. It establishes, what are the behavioral expectations of citizens and police officers and what are the rights of citizens when they are stopped by police officers. We put it in the Driver’s License manual and police academies. We also put it in the school system where between grades 9-12 students will be tested and it has to show on their transcripts. We’ll never know the full impact of it. But we put it in with the hope that we can reduce the number of fatalities. We’ve also done a lot of work with body cameras and dash cameras. We now have a third eye in terms of what did happen, what could’ve happened.

Defender: What actions are being taken to increase the state contract dollars Historically Underutilized Businesses are receiving?

Miles:Some agencies understand, but a whole lot of them don’t. There are an assortment of bills that have been filed, but the bottom line is in order for us to get in the game and play with the state, it’s all about relationships. You have to be a member of all those different associations. It shouldn’t be that way, but it is. They play by the good ol’ boy system here in 2019. And we have to understand you have to be in the room when the deals are getting cut. And if you don’t, then don’t come running to my office talking about “Man, I can’t get no contracts.” I will ask are you qualified. Do you have the capacity. Then, I’ll walk you personally into a state agency.

West:Participation has gone up….with Anglo women. I don’t begrudge them at all. When agencies come before the Finance committee, they say ‘look, the numbers are up’ but when we delve in, we see African-American and Hispanic businesses are at the bottom. So this year the House and Senate is working together and identified about 23 agencies that we’re bringing in separately. We’re asking them to figure out which specific activities they can engage in to change the trajectory of African-American and Hispanic business participation.