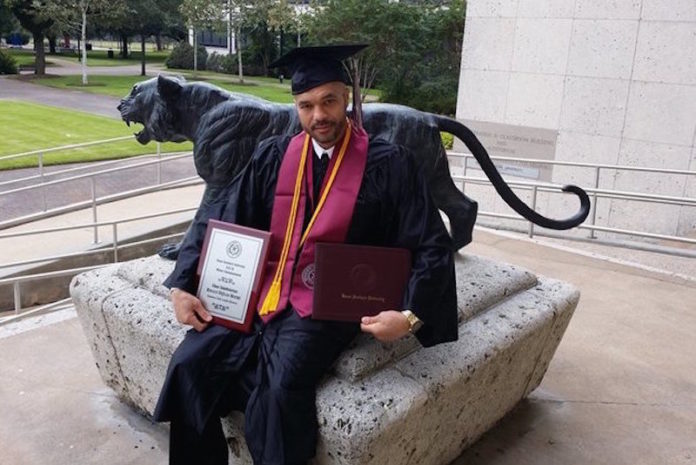 Renald “Ren” Moore is not your average college valedictorian.

The 42-year-old had to overcome more obstacles than most to reach the moment this month where he proudly walked across the stage to collect his bachelors degree in Radio, Television and Film at Texas Southern University, a historically black university in Houston, Texas.

He was raised by his grandmother and step-grandfather for most of his childhood. And the Houston native, then known as Reynoil White, found himself in trouble with other students and teachers frequently as a child.

“The first time I was arrested was back in the 8th grade, that was for a fight in school,” Moore told The Huffington Post. “My first drug possession case was back in 1989 when I was 14 years old.”

Eventually, he dropped out of school and spent time in detention at Texas Youth Commission juvenile correctional facility in Crockett. He would later end up in county jail for drug possession and evading and resisting arrest. Moore’s reckless lifestyle finally came to a head soon after he left the jail.

In 1993, he was sentenced to 20 years’ imprisonment for murder after shooting a man over a drug deal gone wrong. He was 18 years old.

“I shot him numerous times,”Moore said. “He ran around the corner and died as a result of the gunshot wounds.”

It was in solitary confinement where Moore realized the full implications of taking another person’s life and he decided to take steps toward a positive change for his life, he recalled.

“I resolved in my mind and turned to God, prayed, and asked God to help me better my life and help me straighten my life out,” Moore said, recalling his days contemplating his path in prison. “I was forced to take that long, hard look in the mirror that a lot of people have to do when people confront their demons.”

“I let a lot of people influence me to do the wrong things,” he added.

Moore began to further his education from prison in 2000, earning an associate’s degree in Liberal Arts. He was released from prison in 2013 and went to live with his family, but became homeless after having a disagreement with his stepfather.

“I bounced around from place to place and eventually wound up at the Star of Hope homeless shelter, stayed there a few nights, stayed in the Salvation Army maybe one or two nights, slept at the Metro Rail station and even slept up under the bridge one night,” he said.

“I told myself I would rather sleep up under a bridge than go back to a life of crime.”

Moore applied for numerous jobs, but was unable to find employment. It wasn’t until he was 39 years old that he began to find his purpose, after his mother encouraged him to pursue a college education.

In Texas Southern University, he found a second chance.

But when he first stepped onto campus, Moore faced a rather large roadblock that many take for granted.

It was at TSU that Moore discovered his passion for acting. He was selected for a leading role in the musical “Johnny B. Goode,” produced by associate professor Thomas Meloncon, who is also a playwright.

And now, at the end of his collegiate career, Moore’s 3.9 grade-point average has earned him the top rank of his graduating class.

The university has been offering chances to those who normally wouldn’t receive a college education since 1973, when the state designated TSU as a special purpose institution dedicated to helping underrepresented students.

“Although the University was initially established to educate African Americans, it has become one of the most ethnically diverse institutions in the state,” Wendell Williams, Special Assistant to the President, told HuffPost. “In 1973, the Texas Legislature recognized TSU’s involvement in programs and services particularly suited to the needs of urban residents by designating the institution a special purpose institution for urban programming.”

The result of the school’s initiative shows that the institution offers real second chances to people wanting to turn their lives around, the Houston Chronicle reports. Indeed, Moore’s turnaround underscores the important role historically black colleges and universities play in education.

But while Moore was able to gain access to a program that changed his life, he understands that everyone’s story doesn’t end up like his.

“By all means, stay out of the system. Living the life of a drug kingpin, is not worth it,” Moore said.

“The gangster fairytale that the entertainers sell to this generation is not real. Very few gangsters live that lifestyle and retire. They end up dead, in jail, strung out on drugs or paralyzed. There are so many pitfalls in that lifestyle,” he continued.”

“Find a mentor, stay out of the game, find what it is that you love to do and do it to the fullest.”