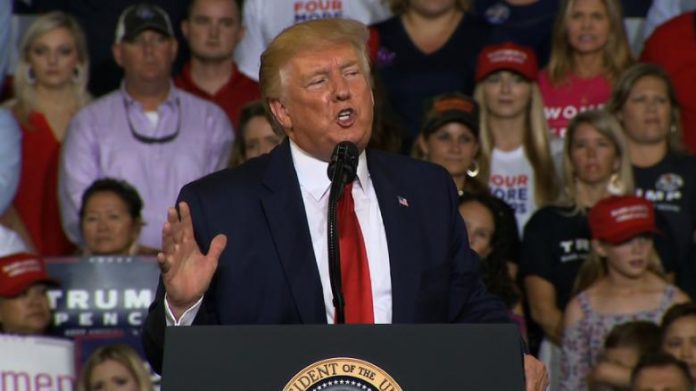 None of the top Democrats seeking the presidential nomination would beat President Donald Trump in Texas in an election held today — and neither would either of the Texas candidates in that race, according to the latest University of Texas/Texas Tribune Poll.

In each matchup, significant numbers of Democrats are holding back their votes — possibly a sign that while they oppose the Republican incumbent, they favor a different Democrat. For instance, 89% of Republicans say they would support Trump over Biden, and 5% say they would favor Biden, leaving 6% unwilling to pick. But in the same race, 82% of Democrats favor Biden, and 4% favor Trump, leaving 14% who either like another Democrat more or don’t want to pick yet. The biggest gap was in the Trump-Castro matchup, where 93% of Republicans have a definite choice and only 71% of Democrats do.

“I don’t think this is a reflection of what’s going to happen in the election, but as we move from registered voters to likely voters in Texas, we tend to get more Republican [results],” said Joshua Blank, research director of the Texas Politics Project at UT-Austin.

While Trump is doing well against those Democrats in Texas, he’s not faring as well when voters are asked whether they will vote for his reelection. Slightly more than half say they “definitely” (46%) or “probably” (6%) will not vote for Trump in 2020. Meanwhile, 40% say they will “definitely” vote for the president’s reelection, and 8% “probably” will.

“That seems to be the durable feature of this poll — that Trump’s durable core is about 40%,” said Daron Shaw, a government professor at the University of Texas at Austin and co-director of the poll. “It’s lackluster, but it’s not fatal. He’s running 5 or 6 points better in Texas than he is nationally.”

Biden would finish first in a Texas Democratic primary election held today, with 23%, followed by Warren at 18%, O’Rourke at 14%, and Sanders at 12% — the only four candidates with double-digit support in the survey.

James Henson, head of the Texas Politics Project at UT-Austin and co-director of the poll, suggested the results revealed flaws in an argument that O’Rourke, as a Democratic nominee, could bring Texas, a reliably red state for at least two decades, into the Democratic fold. “He continues to perform better in Texas than nationally, but not as well as he seemed to be suggesting he would,” Henson said. Failing to lead in Texas, he said, undermined that sales pitch.

The Democratic candidates came up in the same order as in a UT/TT Poll done before the presidential debates in Texas in September, with the sole difference that Biden had 26% then and has 23% now. Support for the other three candidates is right where it was seven weeks earlier.

“The debates don’t seem to have had much of an impact,” Henson said.