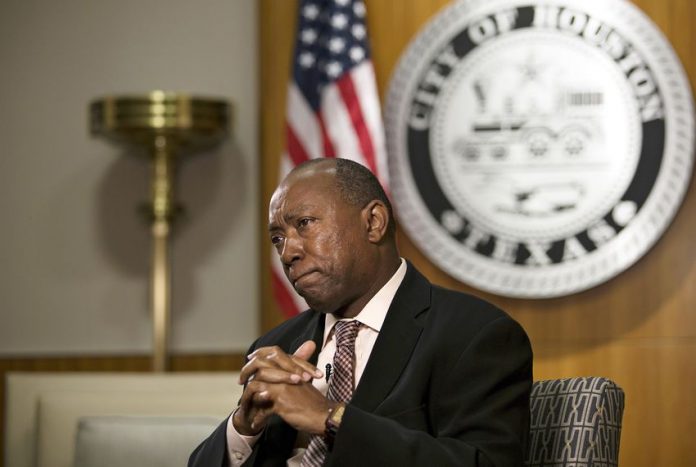 The ominous specter of Donald Trump. “Late-night texts” with a generously compensated intern. A “deep fake” ad — allegedly. And on Thursday morning, a reported break-in at a campaign headquarters.

With early voting underway, the Houston mayoral race is not lacking for drama, but through it all, a fundamental question has persisted: Whatever the first-term stumbles of incumbent Sylvester Turner, is the solidly blue city willing to vote him out for a less-than-Democratic alternative? His closest competitor, swashbuckling attorney Tony Buzbee, is feverishly testing that hypothesis ahead of the Nov. 5 election, spending millions of his dollars to portray Turner as awash in corruption — and Buzbee as the City Hall outsider who can clean it all up.

But Turner has a Trump card — literally — and has spent the closing weeks of the race emphasizing Buzbee’s past support for the president, who is deeply unpopular in Texas’ biggest metropolis.

“This is a Democratic city,” said Keir Murray, a local Democratic consultant not working for any mayoral campaign. With Turner “pretty aggressively painting Buzbee with the Trump brush,” Murray added, “I think that that’s improving the mayor’s fortunes on a daily basis and given him some opportunity to win this race without a runoff.”

To be sure, Turner has his own vulnerabilities as he fights for a second four-year term in the mayor’s office, the potential culmination of a career in public service marked by 27 years in the Texas House and two unsuccessful mayoral bids before finally winning in 2015. And until the bitter end, Turner will have to contend with an unconventional, spotlight-grabbing challenger in Buzbee, who has already self-funded his campaign to the tune of $10 million while refusing donations from others.

Beside Buzbee, Turner faces three other challengers seen as viable to varying degrees: Bill King, the businessman who narrowly lost to Turner in the 2015 mayoral contest; Dwight Boykins, a City Council member; and Sue Lovell, a former council member.

The race is non-partisan, though there is little mystery where the leading candidates are drawing their support. In the latest poll, Turner, a longtime Democrat, got majority support from that party’s voters, while Buzbee, who is eschewing party labels, had the backing of most Republicans.

There have been two public surveys in the race, both giving Turner a wide lead over Buzbee, but not enough to clear 50% and win outright on Nov. 5. Around one-fifth of voters were undecided in each survey.

While Turner may be forced into a runoff, the polls suggest that he would easily defeat his closest competitors in a head-to-head matchup. Still, the prospect of putting away Buzbee for good on Nov. 5 entices Turner and other Democrats fatigued by the rollicking race.

“We would love to wrap it up,” Turner said in an interview. “I think that would be good — not just for me, but for the city of Houston — to wrap it up on Nov. 5, but if that doesn’t happen then we’ll be prepared to go forward in the second round.”

Turner is not a stranger to runoffs after advancing to one in 2015 with King and winning by less than 2 percentage points. Since then, he shepherded a landmark overhaul of the city’s pension system through the Legislature in 2017 and led the city through Hurricane Harvey later that year, as well as Tropical Depression Imelda last month.

But his first term took arguably its biggest hit yet in November 2018, when voters easily approved Proposition B, giving city firefighters pay parity with police officers of equal rank and seniority. Warning the city could not afford it and threatening layoffs, Turner had campaigned against the measure, and its success at the ballot box intensified a bitter feud with the Houston Professional Fire Fighters Association on the eve of Turner’s reelection bid. The union, which backed Turner in 2015, is now behind one of his challengers, Boykins.

While the firefighter fight animated the opening months of the race, the issue lost some political steam in May when a state district judge declared Proposition B “unconstitutional and void in its entirety.”

Still, Turner’s challengers have found ample fodder for other attacks, targeting him over the city’s finances, crime and post-Harvey flood mitigation efforts. On the latter issue, Gov. Greg Abbott, a Republican, gave Turner’s opponents a gift earlier this month when he announced that the state, not cities and counties, will manage $4.3 billion in recovery post-Harvey aid, touching off another spat with the mayor over the city’s pace of recovery.

With flooding ranking as voters’ most pressing concern, local political analyst Nancy Sims said voters do not care about the state-local conflict — “They just want it to stop flooding.”

“I’ve been saying, ‘It might depend if it rains hard between now and the election,’” Sims said of Turner’s fate.

Turner largely ignored his challengers until early September, when he launched an attack ad tying Buzbee to Trump, calling Buzbee a Trump “imitator” and “copycat.” Buzbee hosted a fundraiser for Trump, then the presumptive Republican nominee for president, in June 2016, and while he later disavowed Trump after the release of the infamous “Access Hollywood” tape, he ended up giving $500,000 to Trump’s inauguration committee.

Buzbee has rebuffed Turner’s efforts to yoke him to Trump by arguing he has supported politicians from both parties who have let him down — none more than Turner. Buzbee held a fundraiser for his now-rival in the 2015 runoff.

At a Monday debate, Buzbee conceded some things Trump has done “make me cringe” but insisted he wanted to “divorce myself from all this national politics which is ruining our political system.”

“This mayor would love this to be an election about Trump, but I’m running as Tony Buzbee, my own man, captain, United States Marine, who’s gonna change this city,” Buzbee said.

Turner responded: “If you’re making the same noise, if you’re coming with no experience, if you’re embracing people like Steve Hotze” — a controversial anti-LGBT power broker in Houston politics — “if you’re not running away from President Trump and yet you’re accusing other people of being the worst person you have ever supported, then what does that say about the person making those claims? It’s very important.”

(Hotze himself has grown as an issue in the race after Buzbee repeatedly distanced himself from Hotze’s endorsement at the debate. A day later, The Houston Chronicle reported Buzbee had met multiple times with Hotze in pursuit of his support, and on Thursday, Hotze withdrew his endorsement, calling Buzbee “a liar and a charlatan.”)

Buzbee and Turner have clashed over a host of other issues in recent weeks, including Buzbee’s 2016 DWI case, which was dismissed by a then-district attorney who had previously received campaign cash from Buzbee. The two candidates have even sparred over Turner’s promise to return a theme park to Houston in honor of the city-bred rapper Travis Scott’s 2018 “Astroworld” album.

“Listen, I know Travis Scott’s music better than anybody on this stage, I promise you,” Buzbee said at the debate, dismissing Turner’s election-year focus on the theme park as “more career politician tricks.”

The biggest flashpoint lately has been over a TV news report that Turner approved a $95,000-a-year airport internship and initially said he did not know the man who got the internship, despite evidence to the contrary. Buzbee has held up the revelation as Exhibit A of City Hall corruption, while Turner has defended the intern’s pay by arguing, among other things, that it is consistent with his credentials.

The controversy quickly spilled on to the airwaves, where Buzbee aired an adfeaturing apparently edited photos of Turner and the intern as well as purported “late-night texts” between them. Buzbee claims to have “heavily redacted” texts between the mayor and intern but has not made them public yet.

Turner promptly enlisted a digital forensics firm to analyze the ad and used its findings to call for a criminal investigation into whether Buzbee violated Texas’ new “deep fake” law against purposely deceitful videos. Then, Turner put up his own ad touting the firm’s analysis of Buzbee’s ad.

Other challengers have fought for attention amid the battle between Turner and Buzbee, who hauled a wheelbarrow of horse manure to a January news conference to make the point “something stinks at City Hall.” The wonkish King poked fun at the dynamic in a recent ad embracing his status as “not the most interesting candidate,” noting he does not wear skinny jeans, does not sport tattoos and has never owned a tank — all Buzbee attributes.

King is nonetheless hopeful that anti-Turner voters will see through Buzbee’s bluster and side with him on meat-and-potatoes issues that he has long been hammering. They include causes like ensuring that the drainage fee the city collects from residents is fully spent on what it is meant for, the subject of a lawsuit filed Monday against the city.

“This is what I’ve been saying for the last several years,” King said in an interview where he touted himself as more knowledgable on the issues — and thus better prepared for the job — than competitors. “I don’t like to think of myself of an I-told-you-so person, but I guess I sort of am.”

More recently, King and Buzbee have exchanged barbs as they seek to secure a potential runoff spot. King has highlighted Buzbee’s 2015 boosterism of Turner — “A love story gone wrong for Houston,” a King website reads — while Buzbee has gone after King for past legal work linking him to Turner.

Boykins, meanwhile, is holding out hope that the firefighters union, and its citywide political organization, can push him into a runoff. He has staked his bid on being firefighters’ fiercest advocate, pledging to negotiate a contract between the city and the union within 60 days of his election.

“You can’t buy these elections,” Boykins said in an interview. “Proposition B was polled to lose, and it won … and we’re taking the same approach.”

Lovell served on City Council from 2006 to 2012 but has stayed active in city politics, allying with the firefighters in the fight over Proposition B last year. A longtime organizer for LGBT rights in the city, Lovell was seen as a threat to Turner’s left flank when she announced her campaign in July.

“Do I hope to compete with him for progressive votes? Yes. Of course I do,” Lovell said in an interview.

Underscoring the extent of their opposition to Turner, Lovell said she would not endorse him if he is forced to a runoff against someone else, and Boykins said he probably wouldn’t either.

While the polls suggest Turner would handily defeat Buzbee in a runoff, the incumbent would likely have to overcome untold millions more in spending against him and an overall escalation in Buzbee’s clamorous campaign style.

The Buzbee-centered drama flared anew Thursday morning, when his campaign announced its headquarters had been broken into overnight and the candidate insinuated that it was politically motivated. Hours later, Houston police issued a statement saying they could not confirm a crime had happened and that an initial investigation found the door “did not appear to be forced or pried open.”