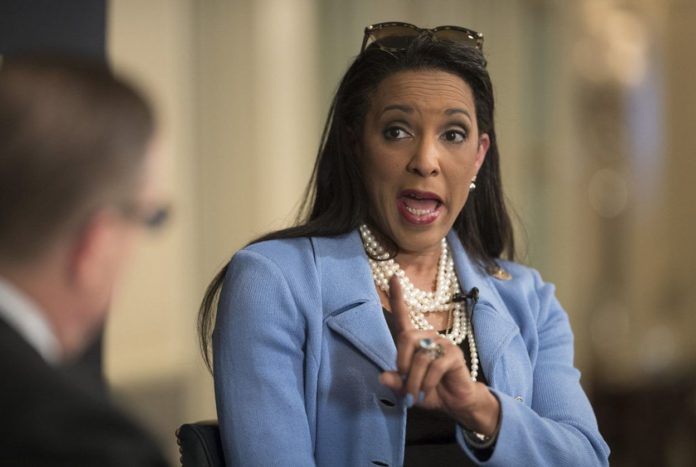 In her first public appearance since being cleared of criminal charges, state Rep. Dawnna Dukes, D-Austin, said Tuesday she had been maligned by the Travis County district attorney, other Austin-area Democratic lawmakers and the news media.

Dukes, speaking at a Texas Tribune event in Austin, said she was motivated to give extensive public comments, for the first time since her criminal charges were dropped, “because it’s an opportunity to tell the real story.”

Last year, amid a criminal inquiry into whether Dukes had misused her public office, she announced she would resign, citing health reasons. On Tuesday, Dukes shed new light on her health issues. At the time, she said, according to a doctor’s diagnosis, “the outcome of my life looked very dim.”

Dukes later chose not to resign. She now faces a slew of Democratic primary challengers who announced they would run when it appeared Dukes would not return to the Legislature.

Dukes said Tuesday she had suffered simultaneously from “MS and MG,” an apparent reference to multiple sclerosis and myasthenia gravis. And she explained that, after a car accident left her seriously injured, she then suffered an additional injury to her neck — which was “severed, having already been weak,” she said — after some horseplay at the Capitol involving a purse strung around her neck.

Still, Dukes said she had recovered sufficiently to serve her district. “I’m healthy enough to serve another term,” she said. “I have fought back. I have on my high heels.”

A grand jury indicted Dukes on 13 felony charges and two misdemeanor charges earlier this year, but prosecutors were forced to drop their case against the Austin Democrat after conceding the felony indictments were based on flawed evidence.

Prosecutors also chose to drop the misdemeanor charges, saying Dukes had agreed to repay the state $1,340. That money would go toward reimbursing a legislative staffer who, prosecutors said, had been inappropriately asked to care for Dukes’ daughter instead of doing state Capitol work. According to prosecutors, Dukes also agreed to pay $500 for an outstanding fine owed to the Texas Ethics Commission and return $5,230 to her campaign account, which she was accused of using for personal expenses.

Dukes, though, was adamant that she had not paid any of that money out of her own pocket. She said Tuesday her attorneys had chosen to pay the fines for her, adding, “they have a lot of money.”

Dukes said racism had played a role in the prosecutors’ investigation, and she singled out the Travis County district attorney’s office for attempting to “convict me in the court of public opinion.” Prosecutors, for example, leaked to the press that Dukes had spent more than $50,000 on an online psychic, though that fact did not appear to have any relevance to the criminal charges, and at one point asked Dukes to submit to drug tests.

Dukes, who is African-American, said: “If it had been anyone else … they would’ve looked at it a little different.”

Dukes said she and her young daughter had witnessed people suspiciously staking out her house as the criminal investigation went on, and that she’d needed extra protection because of multiple attempted break-ins.

The representative has come under fire by political opponents for missing votes at the Capitol. She downplayed those concerns, calling them inaccurate. She said Austin-area lawmakers had plotted against her. State Rep. “Donna Howard was the ringleader, and [Rep.] Celia Israel followed up,” Dukes said.

“There was a concerted effort by my delegation to make me appear more absent than everyone else,” she said.

Howard said afterward by phone: “I’m sorry that she feels that way. I was not working as any kind of a ringleader against her. I have stayed out of this race and I intend to continue to stay out of this race.”