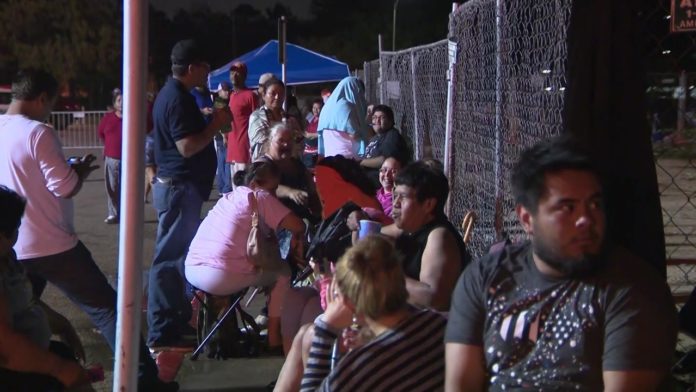 THHS officials say more than 201,000 people across Harris County have applied in the two-week period it’s been open. Typically, the application period lasts one week.

Many Harvey victims thought they would beat the rush Thursday by showing up at the Fifth Ward Multi-Service Center at sunrise, but five hours later, Alvin W. Guy, Jr. was still waiting.

Guy, Jr. was lining up for help with food after Harvey devastated his Kashmere Gardens neighborhood.

Volunteers at the Fifth Ward Multi-Service Center, which has served as a D-SNAP application site since Monday, say they’ve watched the lines get longer by the day.

“We’ve been giving out a lot of water four days straight,” said Isidro Lopez, a volunteer, who was driving a golf cart with a cooler full of bottled water. “It’s been hectic.”

“It’s been crazy,” added Michael Briscoe, who was helping Lopez. “Line’s been backed up way down the street into the neighborhoods and everything.”

Applicants like Roxanne Randall were relieved when they finally made it out of line.

“It feels good cause it’s hot out here,” said Randall, then gestured to a woman pushing her wheelchair. “And I’m so grateful to this nice young lady here.”

Nearby at the Houston Food Bank, Chief Communications Officer Betsy Ballard says her agency will still be helping feed people, including those who can’t get D-SNAP.

“We’re operating at three times our normal pace,” said Ballard, referring to the weeks since Harvey spent helping both disaster victims and everyday citizens in need. “What we’re seeing now are people who never needed help before, ever, who are now needing help for the first time.”

Ballard says the food in their warehouse is leaving almost as fast as it comes in, heading to partner charities and food pantries across 18 local counties.

She says anyone needing help with food can see a list of the charities and pantries listed on their website, go to the ‘Need Food” link, and search a map by ZIP code.

Ballard says the Houston Food Bank is also looking for help to open more distribution centers across the region to get food in people’s homes more quickly.

“We think really it’s gonna be months,” said Ballard, of the recovery effort. “We’re in this for the long haul.”

Anyone needing D-SNAP who can’t make it out to Harris County’s four application centers by 7 p.m. Thursday can head to the George R. Brown Convention Center Friday from 8 a.m. to 7 p.m.

Applicants will need to bring a government-issued ID and meet certain income limits.