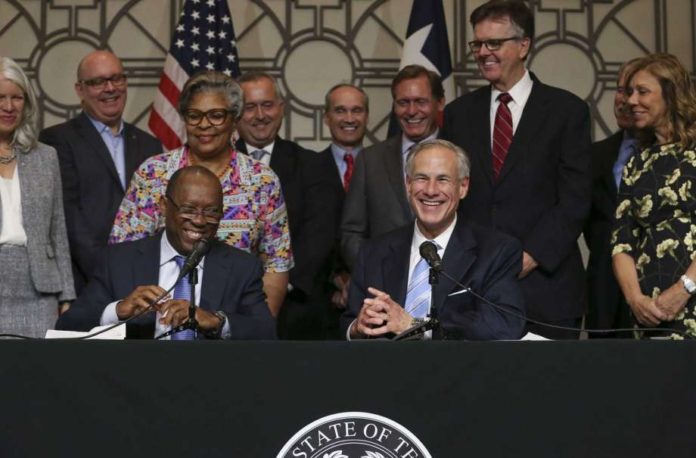 Gov. Greg Abbott finally showed up at Houston’s City Hall with a smile on his face, a $50 million check in his hand and some lofty words about working together for the greater good of all Texans.

He started by saying he wanted to emphasize Texans’ inspiring response to Harvey’s flooding and destruction.

He’s right. It was something to behold, selfless and at times courageous. Neighbors helped neighbors, even at their own peril. They didn’t hesitate. They didn’t take a few days to think it over. They just helped.

Abbott could learn something from that example.

At the press conference Friday, Mayor Sylvester Turner thanked Abbott for the money he had been asking for. Turner says it’s needed for debris removal and other recovery efforts. Without the check, Turner had warned, the city would need a one-time property tax hike that would have cost the average Houston house $48.Check in hand, Turner immediately took the tax hike off the table, although he stressed that the city’s financial struggle will continue for some time. No one knows what the final bill will be. For the first time in history, Turner said, the city exceeded its $100 million insurance coverage, and he estimated the bill for damaged public facilities could reach $175 million.

The mayor and the governor shook hands and talked of working on the same team, wearing the same jersey, fighting the real battles ahead instead of each other.

On camera, it was a nice display of unity. In reality, it rang hollow.

Why did it take the governor so long to see what to many of us is as plain as the piles of wood and sheetrock still cluttering sidewalks across town: 51 inches of rain falling on a city in a matter of days is, in fact, a rainy day – one of historic proportions.

As such, it should qualify for a sliver of assistance from the state’s nearly $11 billion rainy day fund. Not later. Not in 2019. Now.

Instead, Abbott belittled the mayor’s written request for help. Abbott suggested Turner was panicking by asking for the money. Abbott, a Republican, accused the mayor, a Democrat, of taking Harvey recovery “hostage” just to raise taxes. Abbott claimed the mayor “has all the money that he needs,” and argued Turner could use funding from Tax Increment Investment Zones. The claim is incorrect for several reasons, not least of which: Turner doesn’t control TIRZ funds; independent boards do.

Abbott tried to suggest that the state had already given Houston money, when the state served only as a pass-through for federal funds. Turner’s office said Friday’s check was the first storm-related funding directly from the state that the city had received.

Early on, Abbott said he wouldn’t call a special session to grant Houston relief funds, which is somewhat understandable considering the toxic sludge of legislation that would resurface if those flood gates were opened again. (Hint: bathroom bill.)

But Abbott had other options to help Houston, including the one he eventually chose. Abbot says the check came from the governor’s own disaster relief fund.

Why he didn’t do that in the first place is a mystery.

“I just didn’t understand it,” said John Diamond, Kelly Fellow in public finance at Rice University’s Baker Institute. “It was the perfect use of the money. He absolutely needed to give it to us and that makes 1,000 times more sense than raising property taxes on people who had their houses destroyed.”

Diamond said he didn’t agree with Turner’s plan for an emergency tax hike, but said asking Abbott for money was the only other option.

Turner had already drained the city’s reserves. He couldn’t cut back on essential services such as police and fire. I asked if any other programs, such as those that fund tax breaks for downtown developers, could be sacrificed, but Diamond pushed back.

So what made Abbott change his mind?

The cynics might say a poll influenced him. Maybe somebody showed him a map of all the Republican-voting areas that flooded. Maybe the governor, known to track media reports closely, responded to the lashing he got in the press. That included a Chronicle editorial likening Abbott’s refusal to provide state money to President Gerald Ford’s response to a federal bailout of New York City in 1975, which the New York Daily News immortalized in the headline: “Ford to City: Drop Dead.”

But maybe the governor simply came to his senses.

To be fair, Abbott has shown leadership in other areas. He negotiated a higher federal match for federal funding. He chose respected Texas A&M Chancellor John Sharp to lead state recovery efforts. And Abbott and other top state officials repeatedly indicated they planned to use rainy day funds to help Houston, albeit not until much later.

Maybe Abbott finally took a hard look at our struggling city of millions, a hard-working city responsible for a third of the state’s economy, and decided Houston’s recovery was worth the investment – sooner rather than later.

“We no longer have just ‘FEMA’ but ‘TEMA’ now, too,” state Sen. Paul Bettencourt, R-Houston, quipped after the press conference, referring to Texas’ own version of the Federal Emergency Management Agency.

He said Harvey’s impact, stretching hundreds of miles, “takes a while to sink in and it is unprecedented.”

Yes, but the situation is also urgent. People need debris off their lawns. They need normalcy. They need it now.

Going forward, we need a governor who responds to crisis the way everyday Texans do. Selflessly, with courage, and without hesitation.

Houston Mayor Sylvester Turner looks ahead to next two years