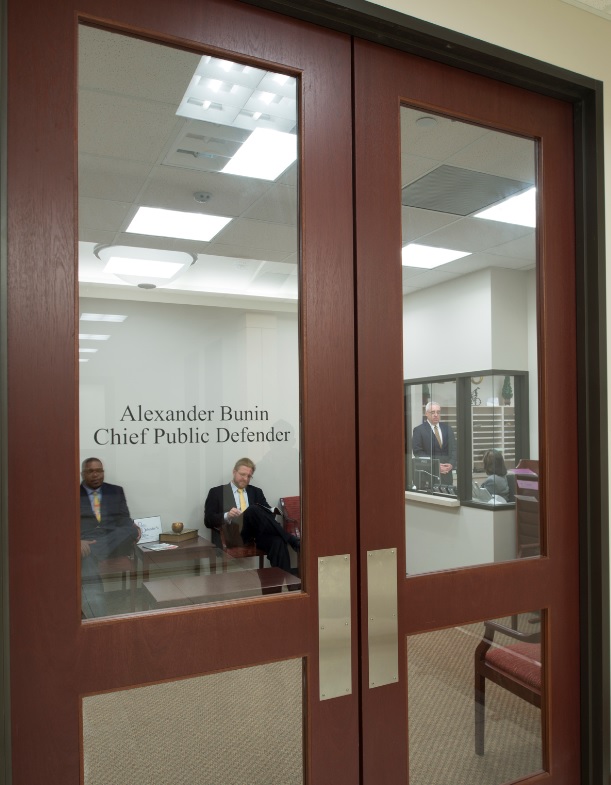 The Harris County Public Defender’s Officeis hiring additional lawyers to represent more people who can’t afford legal representation. Support for the new hiring is divided along party lines, with the Democratic commissioners supporting it and the Republicans opposing it.

The Public Defender’s Office was created in late 2010. It’s tasked with representing indigent people charged in the misdemeanor, felony, and juvenile courts.

In February 2011, two months after the office opened, Chief Public Defender Alexander Bunin had approximately 24 lawyers. Currently, the office has about 90 lawyers.

In February of this year, the Harris County Commissioners Court approved an increase of $9 million for the Public Defender’s Office budget, so that it could hire 61 new employees, mostly lawyers. The hiring is ongoing.

Bunin told News 88.7 his office has hired 36 new employees since the budget increase, including 24 lawyers, four investigators, and four administrative staffers. Bunin has until the end of February 2020 to fill the additional 25 positions.Video Player00:0000:13

“With this fiscal year I expect us to have about 20 percent of all appointed cases,” he said “We could grow to reach as many as 50 percent, I don’t know that we would want to grow any more than that.”

Bunin agreed with Ellis and added that his budget increase was granted to catch up. “For the first eight years we did not grow very much at all. There were no real resources put into our growth,” he said, “so when the commissioners court looked at it this year what they were looking at is to bring us up to the level where, had we grown each of those years as we could have, where we would have been.”Video Player00:0000:16

“I think it was the wrong move and I think that the district attorney needs more people,” Radack said. “I voted that way and so, obviously, voted against that increase for (the) public defender.”

Harris County also wants to create a new program, called Managed Assigned Counsel, that will assign private attorneys to defendants who can’t afford to pay for their own legal representation. The new department would oversee the appointment of private counsel in all misdemeanor and non-capital felony trials that aren’t handled by the Public Defender’s Office.

In Harris and other Texas counties, judges can assign the representation of indigent defendants to private attorneys. Instead, the new department would take care of  that. The public defender’s office would retain the priority for getting the cases, and the private attorneys would be designated when the office reached its maximum case capacity.

The Texas Indigent Defense Commission supports the initiative. Besides assigning vetted private attorneys, the Managed Assigned Counsel program would also make sure that they comply with caseload standards and have the resources they need.

Both Bunin and Ellis think the Managed Assigned Counsel Office would be more neutral than the judges.

Ellis says there are times when a judge appointing a private lawyer can represent a “conflict of interest.” Radack still believes that judges assigning counsel is appropriate. “I have confidence in the judges,” Radack said.