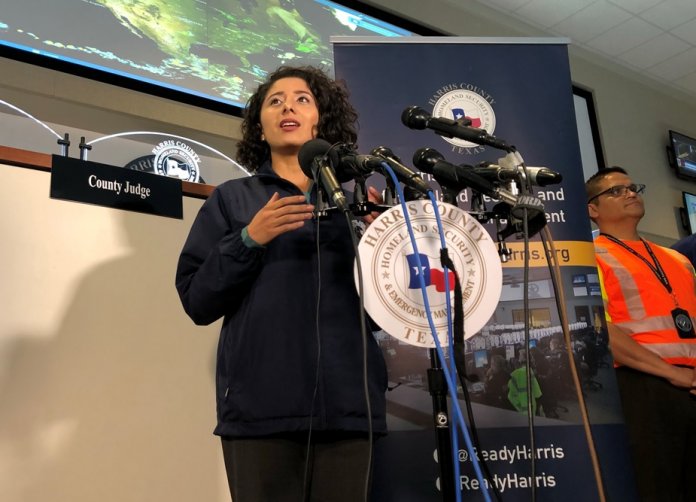 The 2019 hurricane season started June 1, and will last until November 30. The National Oceanic and Atmospheric Administration is predicting that nine to 15 named storms could potentially develop in the Atlantic this year. Four to eight of them could become hurricanes and Harris County Judge Lina Hidalgo is urging residents to be vigilant and be prepared for an emergency.

NOAA also predicts two to four storms could strengthen into major hurricanes of 111 mph or higher. If that forecast holds, it would make for a near-normal season because an average hurricane season produces 12 named storms, of which six become hurricanes, including three major hurricanes.

But weather experts are asking the public to remain alert.

“We don’t need a tropical system to have a flood in Houston, as we know. Slow moving thunderstorms can drop rain at rates of four, five, six inches per hour,” said Dan Reilly, a meteorologist with the National Weather Service, during a news conference with Hidalgo.

“We’ve had years where there are only four named storms all year,” added Reilly, “(In) 1983 (Hurricane) Alicia was a direct hit on Houston but a very quiet year overall.”

Hidalgo noted that Harris County is relatively near the coastline, making the region vulnerable. “We have to be as vigilant as ever,” she emphasized. “We live in a low lying area, we’re vulnerable to flooding, we don’t know when we might have a cloud stop right on top of us and sit there.”

Hidalgo underscored that the county is investing hundreds of millions of dollars in flood control measures but, even so, it would be ideal that all residents had flood insurance. “The reality is we live 50 feet above sea level and since Harris County and Houston were founded we have always battled with flooding,” she told Houston Matters on Friday.

The county judge also gave practical advice to homeowners and residents. She said it’s good to make sure trees close enough to damage a home are cut down and to study the evacuation routes of the area where you live.

Having an emergency kit with a first aid kit, water, prescription medicines and other items is also very useful. Harris County has specific recommendations about emergency kits posted on ReadyHarris.org.

If you have members of your family that have special health care needs, a document that summarizes them is also an important component of an emergency kit. Dr. Heather Moore, with Texas Children’s Hospital, told Houston Matters that FEMA, the American Academy of Pediatrics and the American College of Emergency Medicinehave templates of the document.

Houston Mayor Sylvester Turner also urged Houstonians to stay informed and alert, and to be prepared in case of an emergency.