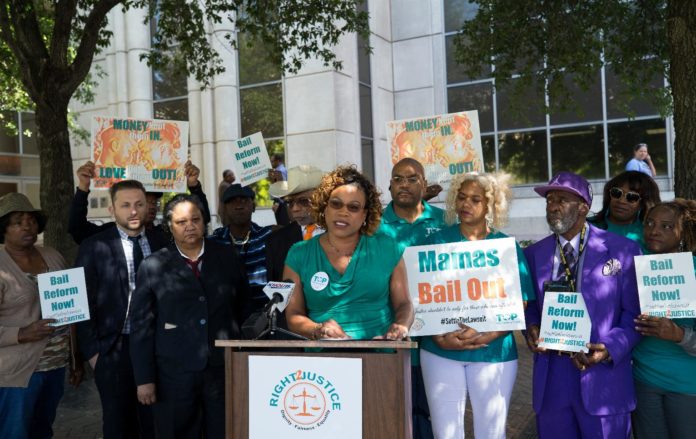 HOUSTON (AP) — Officials in Texas’ most populous county are concerned that potentially dangerous people are being released from jail under a federal court order that determined the local bail system discriminates against poor people accused of misdemeanor crimes.

Harris County officials said that in the first 17 days the court order was in place, 21 percent of the 1,275 people accused of misdemeanors and released because they couldn’t afford a bond failed to appear for follow-up court hearings.

By comparison, of those who were able to afford a bond, 3.8 percent failed to appear in court.

But community and legal groups that sued over the bail system in Harris County — home to Houston, the nation’s fourth largest city — are accusing county officials of fearmongering by highlighting preliminary statistics that give an incomplete picture.

Her ruling granted a preliminary injunction in an ongoing lawsuit that accuses Harris County’s bail system of keeping poor misdemeanor defendants jailed only because they can’t afford to pay a bond.

Under Rosenthal’s order, indigent inmates who certify in a financial affidavit that they can’t afford to post cash bail would be released on personal recognizance bonds while they await trial on misdemeanor offenses. Some defendants, such as those with immigration detainers or an outstanding warrant in another jurisdiction, wouldn’t be eligible for such bonds. The order went into effect on June 6.

Some Harris County commissioners have been critical, suggesting that authorities are now required to release people who could be a danger to the community, including some arrested for such charges as assault on a family member and driving while intoxicated.

During a meeting last week, Harris County Commissioner Jack Cagle highlighted one case of an individual who had been freed on an evading arrest charge and then was rearrested a few days later on a charge of public lewdness for allegedly exposing himself at a city park.

“Would you say some of these people getting out are not the nicest of people, even if it’s a misdemeanor?” Commissioner Steve Radack asked during last week’s meeting.

County officials have said 40 of the misdemeanor defendants who’ve been released on personal bonds under the order have been charged with new crimes.

“It’s really, really shocking that they’re concerned about 40 re-arrests and not the thousand people for whom the cost of jailing was saved, whose lives weren’t disrupted,” said Elizabeth Rossi, an attorney with Civil Rights Corps, a Washington-based nonprofit that is among the groups suing the county.

Rossi said many misdemeanor defendants who miss a court appearance likely do it because they weren’t able to miss work or get child care in order to make it to court.

County officials also suggested there are no mechanisms in place to hold accountable individuals who could be repeatedly arrested on misdemeanor charges and then freed each time by simply indicating they can’t afford to pay for a bond.

“Any time someone is arrested while out on release, they can face another criminal charge, they can face heightened penalties. It’s not like there’s no repercussions,” Rossi said.

University of Texas School of Law professor Jennifer Laurin said it’s too early to draw any conclusions about the effects of Rosenthal’s order.

An appeal by Harris County of Rosenthal’s order is pending before the 5th U.S. Circuit Court of Appeals.