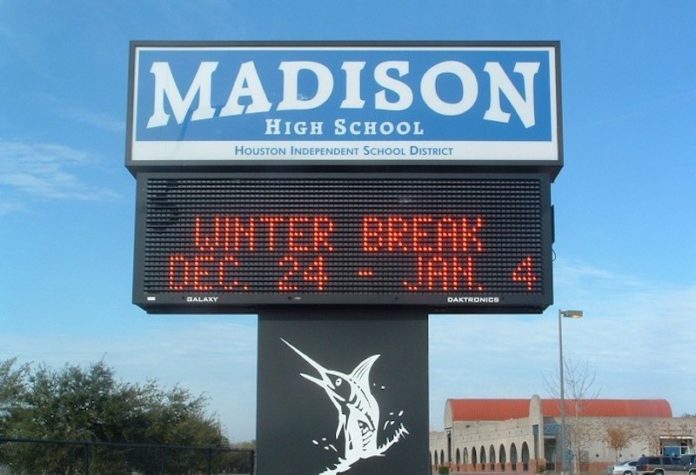 The HISD Board of Education on Thursday approved construction contracts for Askew Elementary School and Madison High School, both part of the district’s voter-approved 2012 Bond Program. The schools will be among almost three dozen projects across the district under construction by the end of the year.

Located on Houston’s west side, Askew Elementary is slated to receive $26.6 million for a new school accommodating 850 pre-kindergarten through fifth-grade students. The new two-story building will be erected on the north side of the campus, with the main entrance continuing to face south along Wood Lodge Drive. Design plans call for ample natural light and flexible learning spaces, as well as areas to accommodate outdoor learning opportunities.

HISD sought competitive sealed proposals for the project after terminating negotiations with Askew’s existing construction manager-at-risk earlier this year. The bid approved by the board was submitted by Drymalla Construction Company, Inc. The proposal – one of two bids submitted – includes a base bid of almost $18.2 million and a construction contingency of $630,000, with the total cost not to exceed $18.8 million.

The project could be completed as early as the fourth quarter of 2018.

Madison High School, located in southwest Houston, is slated to receive $82.7 million for a new school that will accommodate 1,900 to 2,100 students and incorporate recent science and classroom building renovations. Plans call for the new school to face West Orem Drive with a defined entrance that will help integrate the new facility into the community. The entrance will be flanked by a three-story academic wing to the east and performing arts and community spaces to the west.

HISD received two competitive sealed proposals for the project, which includes construction of a new high school and athletic fields and demolition of the existing campus. The bid approved by the board was submitted by Satterfield and Pontikes Construction, Inc. The bid includes a base bid of $63 million and a construction contingency of $1.9 million, meaning the total cost would not exceed $64.9 million.

The project could be completed as early as the fourth quarter of 2018, though additional site work could continue into the first quarter of 2019.

Also Thursday, the HISD Board of Education postponed until January a vote on the proposed 2017-2018 academic calendar.