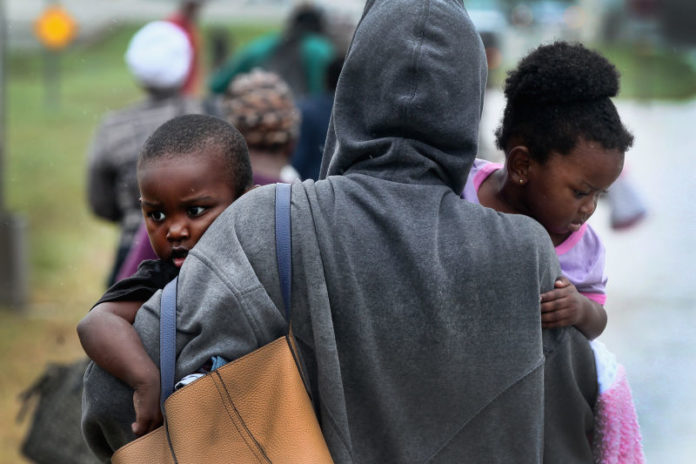 After already hitting the Houston area with record rainfall and deadly flooding, Harvey is expected to make landfall once again Tuesday night, this time somewhere along the Louisiana border, as residents in the area still look to find help and shelter from the storm.

NBC News reports that Houston Mayor Sylvester Turner has imposed a mandatory, indefinite curfew from 10 p.m. until 5 a.m., and he is warning all residents about criminals impersonating law enforcement, going door-to-door to lure residents out in an attempt to rob them. Additionally, the Harris County district attorney’s office told NBC that 14 people have been arrested on suspicion of looting.

Harvey is now a tropical storm with maximum winds of about 50 mph. At 8 p.m. ET, the storm was located about 70 miles southeast of Galveston, Texas, according to NBC, and was moving east at about 6 mph. The storm is expected to remain offshore in the Gulf of Mexico and hit land again in southeast Texas on Wednesday.

Forecasters say the heavy rain is expected to continue over the next several days with parts of Texas and Louisiana getting record rainfall over Labor Day weekend.

So far, 5 people have been officially reported dead as a result of the storm, including veteran Houston Steve Perez, 60. Perez was driving to work on Sunday when he drowned.

NBC reports that the storm system is expected to pour a record 50 inches of rain in Texas by later this week. The storm is expected to travel through southwest Louisiana and move northeast across the state, passing through both New Orleans and Baton Rouge.

About 500 people have already been evacuated from the Gulf Coast area near the Texas-Louisiana border.

This happens as New Orleans marks the 12th anniversary of Hurricane Katrina, which displaced many residents and saw as many as 1,800 people killed.

According to NBC, Donald Trump has already declared a disaster in five Louisiana parishes ahead of the storm’s arrival, and he has authorized FEMA to coordinate relief efforts there, which will allow the federal government to cover some of the emergency costs.

Meanwhile, in Texas, almost 275,000 customers remained without power on Tuesday night. Mayor Turner said that since the weekend, more than 3,500 people have been rescued and 150 more remained in “critical” situations.

The George R. Brown Convention Center is at double its capacity with 5,000 displaced residents seeking shelter, so the Houston Rockets basketball team has agreed to open its arena, the Toyota Center, for overflow evacuees.

The area’s two major airports are expected to reopen in the next couple of days. Houston Hobby Airport will reopen on Wednesday, and George Bush Intercontinental will reopen on Thursday.