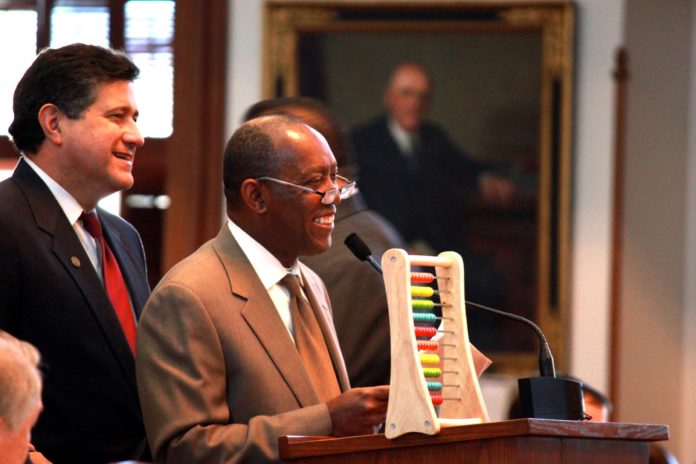 After hearing testimony from Mayor Sylvester Turner and many others, the Texas Senate State Affairs Committee today voted to send the Houston Pension Solution to the full senate for approval.  With one exception, the measure passed out of committee is the same reform package supported by a 16-1 vote of City Council and forwarded to Austin by the City of Houston.

“This is a historic day,” said Mayor Turner.  “With today’s vote, the state affairs committee joins the growing list of supporters for the Houston Pension Solution.   Our plan eliminates $8.1 billion in unfunded liability, caps future costs, does not require a tax increase and is budget neutral.  There is no other plan that achieves these goals and has the same consensus of support.”

The state affairs committee measure includes a provision requiring a vote for the issuance of Pension Obligation Bonds (POBs).  The agreement between the City and the Houston Police Officers Pension System (HPOPS) as well as the Houston Municipal Employees Pension System (HMEPS) includes the issuance of $1 billion in pension bonds to replace existing debt the city already owes HPOPS and HMEPS.  They will not result in new borrowing.

“We oppose the inclusion of this provision and will continue to fight for its removal,” said Turner.  “As my father taught me, a deal is a deal.  We have kept our word to the police and municipal employee pension systems.  Now I am asking the Texas Legislature to do the same.”

The mayor is reiterating a call to the Houston Firefighter Relief and Retirement Fund (HFRRF) to provide data on the true costs of providing firefighter pension benefits.  He was joined in that call by Texas Senator Joan Huffman who is sponsoring the Houston Pension Solution in the Texas Senate.  Both the mayor and Huffman indicated willingness to revisit the proposed changes in firefighter pension benefits if HFRRF will provide the cost analysis it has, so far, refused to release.

Mayor Turner will travel to Austin again next Monday to testify before the Texas House Committee on Pensions.  The house version of the bill does not include the requirement of a vote for POBs.