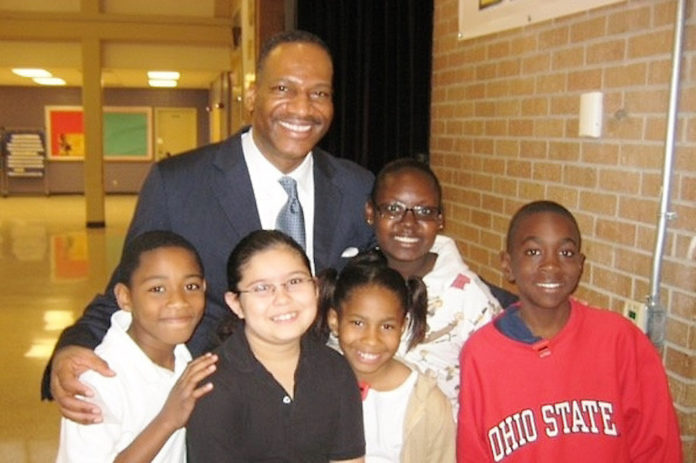 As part of Houston Real Men Read, Worrell read the book “Wings” to Tanner’s class shortly after former HISD Trustee Paula Harris established the program in partnership with Scholastic in the spring of 2009. During that visit, Worrell told the students about his background and asked them what they wanted to be when they grew up. Tanner raised his hand and said, “I am going to be the president of Scholastic one day.” Worrell was so moved he gave Tanner his business card and asked him to keep in touch. And then Tanner gave the man who would become his mentor a thank-you note that Worrell carries in his wallet to this day.

“At our first meeting, Bradford told me his plan was to become the next president of Scholastic Inc.,” Worrell said. “When I described the effort and commitment required to achieve this goal, Brad said he was willing to work hard and would do his very best to earn every opportunity. I believed him then, and as he enters college this fall, I believe in him now. Brad is a tremendous gift to me, reminding me with every interaction of his potential and the potential for excellence that resides in all our young people. I am proud to be his friend and supporter.”

Tanner describes his relationship with his mentor as one that has impacted his life in many positive ways, and continues to do so.

“The relationship Greg and I share means a lot to me,” Tanner said. “He inspires me to become a better person every day and to exceed the standards and expectations he has set for me. We talk about making good choices and taking responsibility for those choices. I am so thankful that Real Men Read bought him into my life.”

Houston Real Men Read (HRMR) is a literacy program in which men read once a month to HISD students in second, fifth, and seventh grades, and each student gets a free copy of the book. Harris came up with the program as a way to bring the schools in her district together with the community. She wanted to provide students with a positive male role model. Scholastic became a partner, supplying the books and discussion cards.

“It makes me so happy that Houston Real Men Read has become a staple in HISD,” Harris said recently. “When we started the program, our primary goal was to have students understand the importance of reading, start a home library, and have a male role model. HRMR has surpassed my expectations and become bigger and better than I could ever have imagined. Consistent caring by adults really can change lives.”

After Worrell’s positive experience reading that first time, he committed to travel to Houston to read to students once a month. Worrell has continued to be a mentor to Tanner over the years and was in Houston recently to attend Tanner’s graduation from Bellaire High School.

“What started as a mentorship has blossomed into something so much more,” she said. “Brad came home and told me he met this guy, and he was going to take his job one day. Who knew that one moment would change our lives forever.”

Over the past eight years, Worrell has checked on Tanner regularly and continues to mentor him. He has even been helping Brad’s younger brother Kevon. Both the boys have been to New York numerous times to visit Worrell and the Scholastic offices. And Tanner has been working with Scholastic consultant John Robinson during the summer helping children.

Tanner plans to attend Texas Southern University next year and then transfer to University of Southern California. No doubt Worrell will make sure Tanner stays on track to graduate in four years.