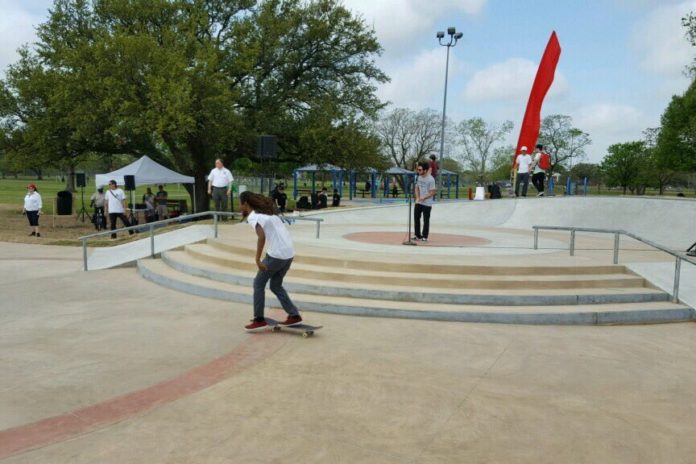 “The Gulfton Youth who worked to make this dream come true show us all that dreams are not limited by age or by perceived obstacles,” said Houston Mayor Sylvester Turner. “Dreams become reality when you are willing to work for them. I want to thank these youngsters for not giving up. It is due to their hard work that generations of kids to come will be able to enjoy this recreational opportunity.”

The Station Skatepark at Burnett-Bayland Park began as a dream at the end of 2012 when a local group of skaters from the Gulfton area brought the idea to their area Council Member, who connected them to BakerRipley, formerly Neighborhood Centers, for guidance and mentorship.

“The grand opening of the Station Skatepark is a proud day for the Gulfton community. I am especially proud of our young skateboarders who envisioned this park and worked to bring it about,” said Council Member Mike Laster, District J. “Special thanks should be given to Parks Director Joe Turner in all his efforts in completing this project. Thanks also to BakerRipley, Clear Channel Communications, and Mayor Annise Parker and Mayor Sylvester Turner for providing funds for this project.”

The Gulfton Youth spent months doing research and worked with BakerRipley to develop their idea of what their dream skatepark should look like.

“This is a perfect example of what happens when we invest in community. This skatepark is the result of Gulfton youths’ drive and dedication to make their community stronger. This goes far beyond creating a space where they can practice their sport, this is about youth becoming leaders, speaking their minds, following through with their passions, and committing to being role models for others to pursue their dreams,” said Angela Blanchard, BakerRipley President and CEO.

After months of research, they presented their proposal to Joe Turner, Director, Houston Parks and Recreation Department.

“I am delighted to see the completion of this skatepark for a couple of reasons. First, because of the young people who devoted their time and energy to making it a reality. They should be an example for all of us – to show us how to channel creativity, dreams and hard work to make a positive change,” said Joe Turner, Director, Houston Parks and Recreation Department. “And second, because it provides this neighborhood park with an amazing facility and our department with its second in-ground skatepark.”

The scope of work for the Burnett-Bayland Park skatepark includes: site clearing; site grading and earthwork, detention and drainage; construction of a new 17,500 square foot skatepark with a volcano, bowl, upper decks, grind ledges, stairs and handrails, flat bars, various banks, quarter pipe and multiple steel pipes; a new entry plaza, site electrical and lighting along with reconstruction of a portion of an existing trail.

The total cost is $1,092,696 and was made possible through a number of funding sources, including:

P2MG is the General Contractor and Wally Hollyday, out of California, is the skatepark subcontractor. Clark Condon Associates is the design consultant and Stantec is the skatepark sub-consultant. The General Services Department managed the design and construction for the Burnett-Bayland Park Skatepark project. Chip Perry, General Services Department, was the Project Manager.

About BakerRipley, formerly Neighborhood Centers
BakerRipley, formerly Neighborhood Centers, brings resources, education and connection to nearly 600,000 people throughout Texas each year. For more than a century, BakerRipley has offered innovative solutions to help low-income families in emerging neighborhoods get a foothold in the region’s economy. The organization works with residents in more than 70 service locations to help them discover the strengths and skills necessary to become productive, prosperous and self-sufficient. Building on the strengths of individuals and communities, BakerRipley is transforming them. FOR GOOD. BakerRipley is a United Way Agency. For more information, visit www.neighborhood-centers.org.