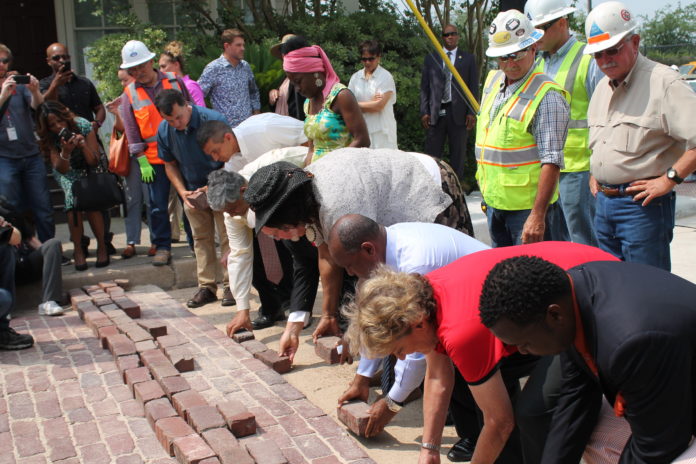 Mayor Sylvester Turner, City leaders and Freedmen’s Town community members took part in a ceremony to mark the beginning of the re-installation of historic bricks that were temporarily removed to complete storm drainage improvements in the 4th Ward.

“The City of Houston has fulfilled its promises, the intersection at Genesee Street and Andrews Street is almost complete and these historic bricks are being reinstalled with improved infrastructure. We recognize the important place these bricks hold in the history of our city, and today the bricks get returned home,” said Mayor Turner in a press conference.

Along with the Mayor, the Director of Public Works and Engineering said he would continue to work with the leaders of Freedmen’s Town to make sure their needs were met both as a community, in preserving the rich history of the neighborhood, but also to provide strong infrastructure to protect the health, safety, and comfort of all residents.

The brick ceremony allowed community leaders to hand lay the first few bricks into a new solid foundation. The intersection of Genesee Street and Andrews Street is estimated to be complete in about two weeks.