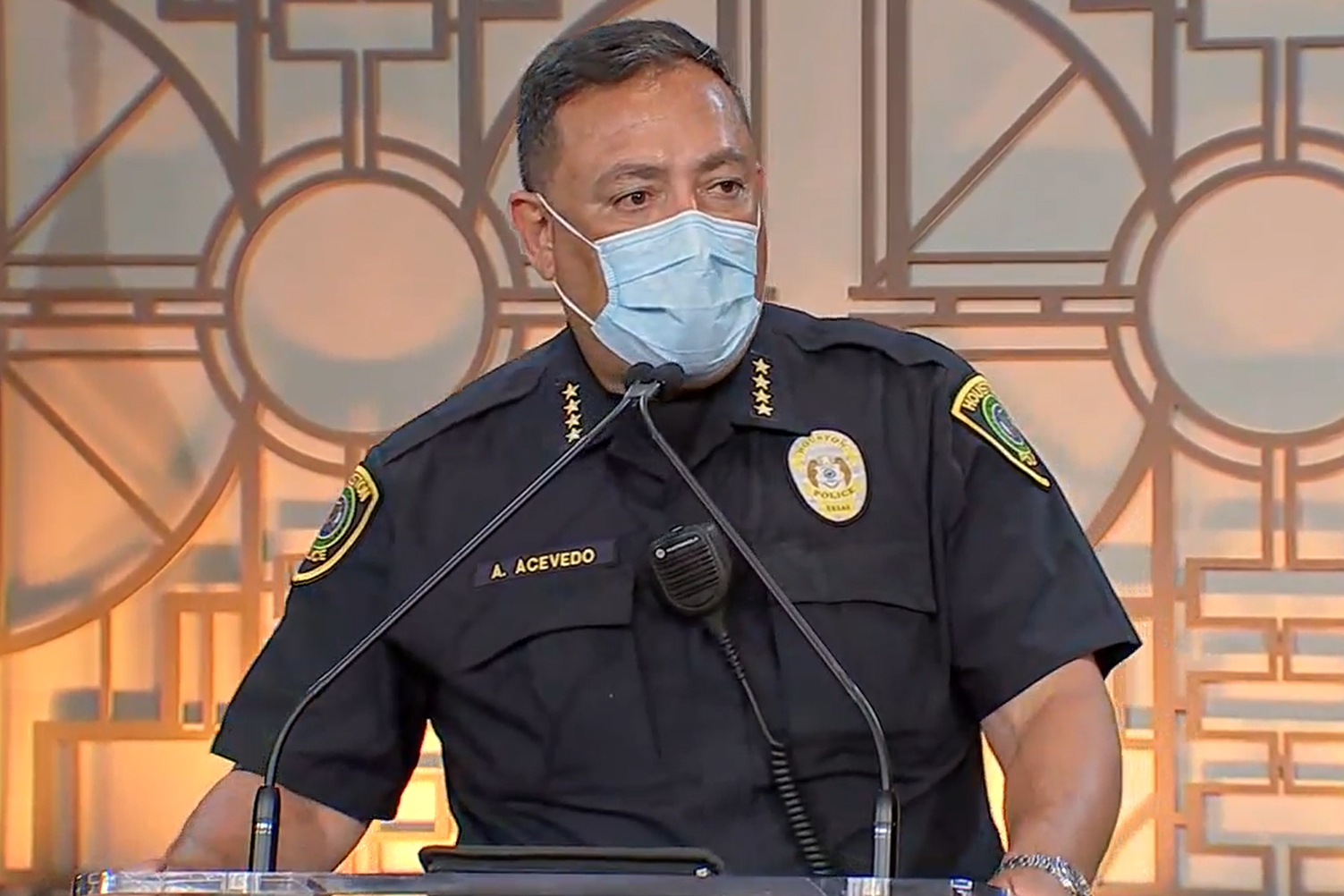 On Houston Matters Friday, Acevedo said 353 people have been murdered in Houston this year, a 44% increase from 2019. Of that, there were 16 more gang related and 25 more narcotics-related homicides year-to-date, which Acevedo told host Craig Cohen on Friday were the “biggest drivers” in the spike.

At a press conference later in the day, he referred to the circumstances as a “perfect storm,” blaming a lack of resources as one contribution to the rise in cases.

Friday’s press conference came one day after the Houston Chronicle published an investigation finding HPD was solving significantly fewer cases than in previous years. Houston homicide detectives solved 89% of homicides in 2011, compared to just 49% as of this may, according to the report.

Acevedo also blamed a high number of people released on bond for contributing to the rise in cases, saying there were 20 people suspected of a crime who were out on bond at the time of the murder.

Crime Stoppers of Houston’s victims advocate Andrew Kahan echoed Acevedo’s sentiments, saying there was a “revolving door” at the courthouse that contributed to rising crime rates.

“This is collateral damage of what we’re seeing of bond reform,” Kahan said. “If we can get a grip on what’s happening at the courthouse in continuing releasing offenders, you will see a significant reduction in crime.”

The county was succesfully sued for its cash bail practices as they pertained to misdemeanor offenses, after a federal judge found that they unconstitutionally discriminated against people who could not afford bail, leaving indigent defendants more likely to spend time in jail pretrial than people who could afford bail, for the same offense.

A September report from the federal monitor overseeing Harris County’s bail practices found it did not lead to an increase in reoffenses. Bail reform did not apply to felony cases, but a similar lawsuit challenging the use of cash bail in felony cases is currently in front of a federal judge in Houston.

Acevedo told Houston Matters Friday that HPD is putting out more investigators and officers on the streets to help address the rise in violent crime, but that budget constraints, further exacerbated by the pandemic, make these efforts more difficult.

Acevedo said at the later press conference that the Houston Police Department budget increase will help to address challenges in patrol, prevention and investigation, with a bulk of overtime dollars being allocated to investigative units to allow them more time on their cases. The city also used federal CARES Act funding for a new HPD domestic violence response program, and for police overtime.

However, it might take years for the department to handle its backlog of investigations.

“It would take a couple of years if we didn’t have another arrest, another case, just to try to catch up,” Acevedo said.