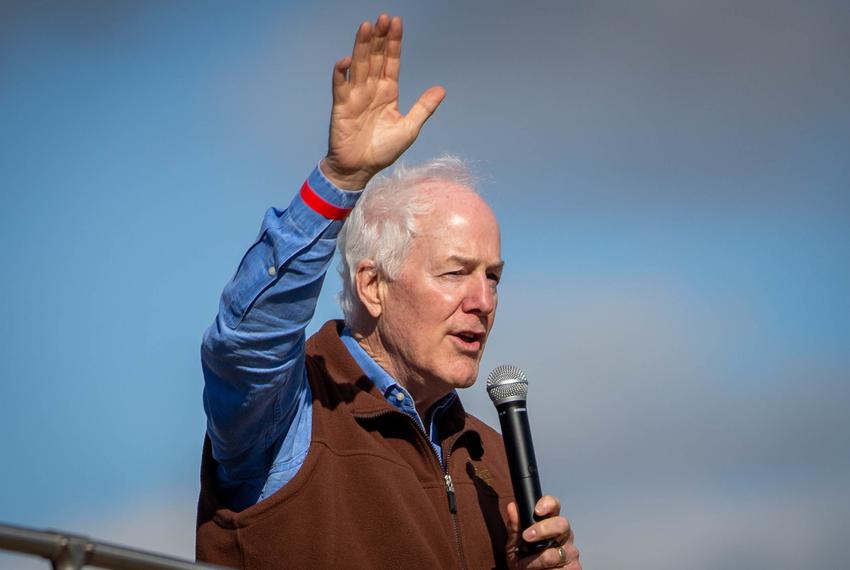 With an estimated 77% of the votes counted, Cornyn was leading Hegar by 8 percentage points, 52.6% to 45%. Decision Desk declared Cornyn the winner earlier in the night when he was up by a point. Libertarian Kerry McKennon was getting 1%, and Green Party candidate David Collins was garnering 0.7%. Hegar called Cornyn and conceded within minutes of the race being called, according to both campaigns. Cornyn gave a victory speech shortly after 9 p.m.

“This is a historic election for so many reasons,” Cornyn said. “Whether I earned your vote or whether you were pulling for my opponent, I’m honored and committed to serving and representing all Texans. “I’m glad we had this fight,” he added. “It’s a fight for the soul of our nation and our state.”

In a statement, Hegar touted the Democratic progress her campaign aided despite losing.

“Together, we stood up and got to work, building a powerful grassroots campaign from the ground up, shattering voter turnout records, and most importantly sending a message to a previously safe Senator that he answers to us,” Hegar said. “I am confident that the work we did will move our state forward for years to come.” Cornyn was competing for his fourth term against Hegar, the former Air Force helicopter pilot who unsuccessfully ran for U.S. House two years ago in suburban Austin.

Throughout the race, Cornyn maintained single-digit polling leads against Hegar — some smaller than others — though she benefited in recent weeks from fundraising momentum and a late outside spending surge, making for a less certain homestretch. Cornyn told reporters after his victory speech that the 11th-hour Democratic spenders “had more money than they knew what to do with, so they ended up investing in a long shot in places like Texas.” Hegar ran against Cornyn, casting him as a career politician whose time had passed and touting herself as a military veteran, working-mom outsider who would better represent Texas values. She accused him of not taking the coronavirus pandemic seriously enough and emphasized his leading role in the GOP push to dismantle the Affordable Care Act and, with it, its protections for people with preexisting conditions. Cornyn, meanwhile, pitched himself as a “steady hand on the wheel” whose congressional seniority was especially needed in such a turbulent time. He portrayed Hegar as too liberal for the state, calling her views hostile to the oil and gas industry and seeking to link her to the “defund the police” movement. After U.S. Sen. Ted Cruz’s unexpectedly close race against Beto O’Rourke in 2018, Cornyn admitted Republicans had a wake-up call and sought early to show he was not taking anything for granted. He hired a campaign manager in January 2019 and lined up a series of big-name intraparty endorsements — including that of President Donald Trump — to guard against serious primary opposition. Cornyn was successful. State Sen. Pat Fallon, R-Frisco, opted against challenging Cornyn after a short flirtation, and Cornyn easily dispatched four primary opponents in March. Hegar’s path to her party’s nomination was far longer and more difficult. The Democratic primary attracted 11 other candidates, and many were upset when the Democratic Senatorial Campaign Committee intervened in December and backed Hegar. She finished first in the primary but found herself in a runoff against state Sen. Royce West of Dallas, who proved to be a tough opponent. The runoff was postponed from May until July due to the coronavirus pandemic, and it turned bitter at the end as West interrogated Hegar over her Democratic credentials, and she suggested he had used his public office to enrich himself. Hegar defeated West by 4 points, a closer-than-expected margin that came after an 11th-hour wave of spending by her national Democratic allies. Once in the general election, it was not immediately clear how quickly Hegar would be able to pivot from the protracted nominating process to taking on a well-funded incumbent. She put that question to rest on Sept. 30, when she announced she had raised over $13.5 million in the third quarter, nearly eight times more than what she raised in her previous best quarter. She raised nearly double Cornyn’s haul for the period, and more notably, she erased his long-running cash-on-hand advantage. As early voting got underway, more help arrived for Hegar — and in a major way. A coalition of national Democratic super PACs, led by the Silicon Valley-backed Future Forward, dumped over $20 million into the race, much of it on TV ads against Cornyn. The incumbent, whose allies were not able to keep up, admitted the late spending spurge was what worried him the most as he neared Election Day. The homestretch was not all positive for Hegar, though. After her relationship with West came up at her only debate with Cornyn, West revealed that he did not plan to vote for her and said she had a problem with Black voters. The Cornyn campaign seized on the bombshell, cutting ads highlighting West’s comments. West pushed back on Cornyn making an issue out of it and said he would vote for Democrats up and down the ballot, but he never confirmed whether he specifically cast a ballot for Hegar. While the pandemic upended plans for in-person campaigning throughout most of the general election, both candidates crisscrossed the state in the final days. Hegar joined U.S. Sen. Kamala Harris, the Democratic vice presidential nominee, for her three-city tour of Texas on Friday before setting out on her own. Cornyn, meanwhile, completed a weeklong bus tour of the state that ended Monday with three stops featuring Cruz. “John Cornyn defeats MJ Hegar to retain U.S. Senate seat” was first published at https://www.texastribune.org/2020/11/03/john-cornyn-mj-hegar-texas-senate/ by The Texas Tribune. The Texas Tribune is proud to celebrate 10 years of exceptional journalism for an exceptional state.