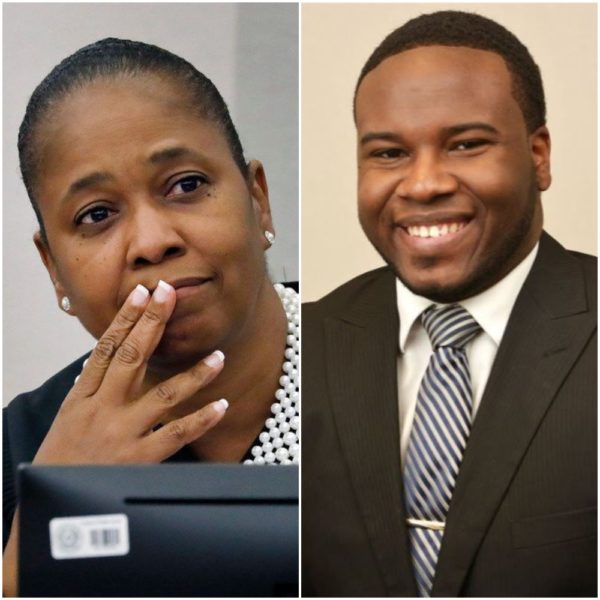 “I’m so sorry,” Judge Tammy Kemp could be heard saying after the video played Wednesday.

The murder trial of white ex-Dallas cop Amber Guyger has garnered so much public interest a local Fox affiliate is broadcasting the trial live on its Facebook page.

So when Kemp allowed the playing of the bodycam video, images of officers giving Jean CPR and of his blood pooled near where he was lying in his living room immediately went public.

The video was shown during questioning of Texas Ranger David Armstrong, who took the stand Wednesday.

Armstrong was asked to assist the Dallas Police Department in its investigation after the shooting.

He testified that he reviewed the bodycam footage, listened to the 911 audio and went inside Jean’s apartment No. 1478, which is directly above Guyger’s unit, No. 1378.

Armstrong said when asked that he doesn’t believe that there is any probable cause that Guyger committed murder.

“I believe that she did perceive him as a deadly threat,” Armstrong said of Jean.

Kemp later ruled she would not allow Armstrong to testify about probable cause or the location of the shooting.

“And I will not allow him to testify concerning how he knows for certain where Mr. Jean was when he was shot,” Kemp said in court.

Guyger could be heard in a 911 call saying more than a dozen times that she thought she was walking into her own apartment when she instead entered Jean’s unit.

Armstrong was shown photos of apartments of both Guyger and Jean during his testimony Wednesday.

The ranger said the layouts of the apartments were similar and that couches in the units were in the same places.

Armstrong also said that at the time of his investigation there were no hall indicators identifying what floor he was on. Since Jean’s death, placards were added, Armstrong said in court.

A day earlier, jurors heard testimony from a neighbor who was asked to testify about what he witnessed before, after and during the Sept. 6, 2018 shooting of the 26-year-old Jean.

Joshua Brown, who he lived directly across the hall from Jean at the South Side Flats apartments, said during court that he met his neighbor the same day he was killed.

Police had knocked on both of the residents’ doors and they stepped outside of their apartments, Brown said.

“It was like they had a noise complaint. It was around like 2 p.m.,” Brown said. “Kind of odd ’cause it wasn’t no noise.”

He said he talked to Jean about the fact both the men were smoking weed and they assumed the smell had attracted police attention.

That night, Brown left his apartment to watch a football game and returned home during the halftime show, Brown said.

It was just before 10 p.m. when he heard what sounded like two people meeting and two gunshots quickly following, Brown said.

He said he was in his apartment for about three minutes before he saw Guyger in the hallway through his peephole. She was talking on the phone, Brown said.

Then he was asked about Jean.

Brown said he had earlier heard his neighbor singing Gospel music and Drake songs in the mornings.

The witness’s voice started trembling, and he tucked his head in his shirt and sniffed.

Judge Kemp called a recess and appeared to be choking back tears as well when Brown left the courtroom.