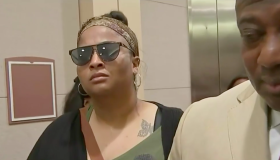 Maleah Davis of Houston, Texas, has been missing since May 3. All signs are pointing to her stepfather Derion Vence but there are many people who are skeptical of her mother Brittany Bowens, which was seen outside of a courtroom today.

There was supposed to be a court hearing today for 26-year-old Vence but it was abruptly canceled for reasons that were not made public. It was reported that he was going to be charged with murder.

As Bowens was leaving the court, it was reported that a mob of protesters screamed “murderer” and “justice for Maleah.” One person allegedly yelled, “Why isn’t she locked up?”

Local activist and her rep Quanell X told reporters, “The main thing right now that all of us want to know is, what did he do with Maleah?” But he was reportedly drowned out by protesters. Click2Houston described Bowen as “stoic” outside of the courthouse. Watch below:=auto” width=”640″ height=”395″ frameborder=”0″ webkitallowfullscreen=”” mozallowfullscreen=”” allowfullscreen=””]

In case you missed it, Vence told Sgt. Mark Holbrook of the Houston Police Department’s Homicide Division that he, Maleah and his two-year-old son were on their way to George Bush Intercontinental Airport Friday night to pick up Maleah’s mother, who was flying in from Massachusetts. Vence said he heard a “popping noise,” like a popped tire and pulled over. He said a blue pickup truck pulled up behind his vehicle and two Hispanic males got out.

One of the men allegedly said “Maleah looks very nice, looks very sweet” before Vence was allegedly hit in the head. He supposedly lost consciousness and woke up at 6 p.m. on Saturday. He said Maleah was missing but his son was still there. Vence claims he walked to a hospital, received treatment and then reported Maleah as missing.

The Associated Press reported that Houston authorities said Vence’s account has “changed several times” and a reporter for the local Fox affiliate tweeted that police consider him a “person of interest.”

The Texas Department of Family and Protective Services said Maleah and her two brothers were removed from their home last year due to reports of abuse.

Maleah reportedly had multiple brain surgeries. According to ABC reporter Shelly Childers, the surgeries were due to physical abuse.

The stepfather’s car has been found and court documents allegedly said police dogs alerted investigators to the “scent of decomposition” in the trunk.

CNN also reports the other children have been removed from the care of Vence Maleah’s mother.

Maleah was reportedly last seen wearing a pink bow in her hair with a light blue zip-up jacket, blue jeans and gray, white and pink sneakers. She has black hair and brown eyes and stands 3 feet tall, weighing 30 to 40 pounds.

We hope and pray Maleah Davis is found safely.