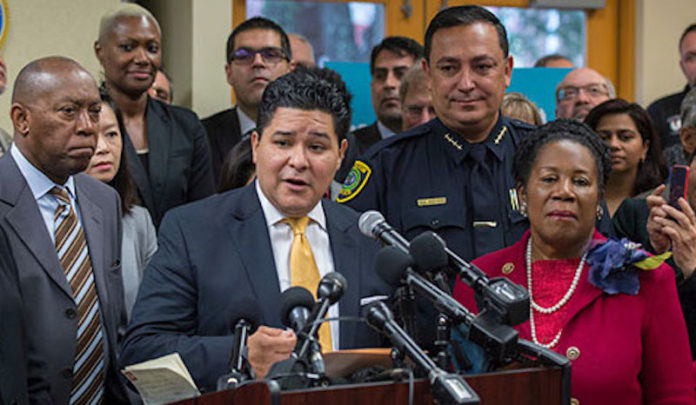 Houston ISD Superintendent Richard Carranza joined Houston Mayor Sylvester Turner on Monday at Baker-Ripley Neighborhood Center to reassure Houston’s immigrant and refugee communities that Houston is a city where they can feel safe and where their children can learn without fear of discrimination due to race, ethnicity, religion, or immigration status.

Both Carranza and Turner emphasized Houston’s value as a diverse city of immigrants and refugees and said they understood that there are questions in the community.

Superintendent Carranza, joined on stage by HISD Trustee Jolanda Jones, stressed that HISD schools are safe spaces for students where learning is the focus.

“There are Supreme Court cases that guarantee the right for our students to have a free and public education in our school system,” Carranza said. “When you come to our schools, you are coming to a safe haven, and we will protect your rights in our schools.”

Carranza also highlighted the district’s efforts to support immigrants and refugees. On Saturday, HISD hosted the DREAM Summit, which aided DREAMers, DACA (Deferred Action for Childhood Arrivals) recipients, visa holders, permanent residents, refugees, and asylum grantees in applying to college and navigating the financial aid process. Carranza also pointed to a strict anti-bullying policy at HISD, which is one of the most comprehensive in the nation, and urged students who feel harassed to come forward and tell an adult.

The district also has worked to keep the community informed with the creation of FAQs to address some questions HISD families may have regarding their immigration status and the district’s commitment to protecting students from discrimination and harassment. Read that document here.

Mayor Turner pointed to the recent launch of the city’s Office of New Americans, which serves immigrants and refugees living in Houston.

“Regardless of where you come from, what you look like, your disability, what you believe, or who you love, we stand together as Houstonians,” Turner said. “And Houston will be a just and compassionate city that will work to protect all people from discrimination and other forms of mistreatment.”