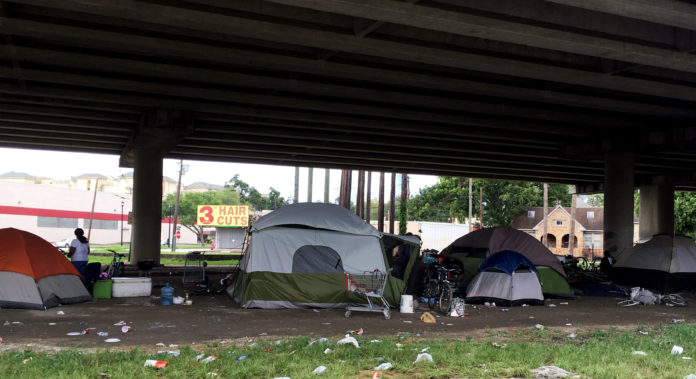 A Houstonian who lives near downtown recently wrote a public letter to Mayor Sylvester Turner about an encampment of homeless people near his residence. The mayor responded with a letter whose entire contents can be viewed by clicking on the link below.

Highlights include the following:

— “We have been able to house over 11,000 homeless individuals since 2012, resulting in a 60% reduction in the overall homeless population.”

— “Despite our ability to permanently house thousands of homeless individuals over the past few years, or perhaps because of it, we are now left with individuals on our streets that are the most difficult to house, with debilitating mental health and substance abuse issues, living in encampments that pose public health and safety risks to both the individuals living in the encampments and the surrounding communities.”

“We will never be able to fully respond to the issue of homelessness and encampments, if we do not respond to the mental health and substance abuse challenges impacting Houstonians on and off the streets.”

“Even if our encampments are considered small compared to those on the West Coast or other major cities across the state and nation, it’s still a major issue that we must all work together to address. From cuts in funding to the lingering impact of a hurricane, it won’t necessarily be easy, but it can and will be done. Enforcement is an important and helpful tool, but not the ultimate solution. I am not looking to simply sweep the issue of homelessness in Houston under the rug, (or displace an encampment into different neighborhoods).  Rather we must work together on permanent solutions to this complex problem.”