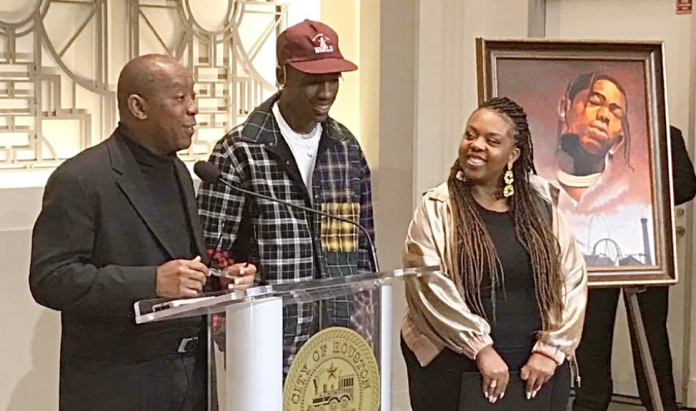 Mayor Sylvester Turner declared Sunday, Nov. 18, 2018 “Astroworld Day” in the City of Houston in recognition of artist/musician/producer Jacques “Travis Scott” Webster II and the debut of his successful Astroworld Festival at NRG Park.

Scottgrew up in nearby Missouri City and frequently talks about his youth at the Astroworld Theme Park, which closed in 2005.

During the proclamation ceremony, the mayor also recognized Scott as one of Houston’s ambassadors for art, education and youth initiatives.

In return, Scott, who has a history of civic engagement and philanthropic work, pledged to support the Mayor’s Art Scholarship Program, Houston Poet Laureate Program, Hire Houston Youth, My Brother’s Keeper (MBK) Houston, Team Up, and other city-wide adolescent and youth programs.

Several dozen students representing local high schools and Texas Southern University attended the proclamation ceremony.
“I love you all and thank you, mayor. I’m going to make this my goal to come back and deliver every time,” Scott said.

The event coincided with the second day of the 13th Annual Houston Via Colori Street Painting Festival. A group of Hastings High School Students from the Alief Independent School District created a vibrant mural of Travis Scott and had an opportunity to meet the widely acclaimed artist.

Houston Via Colori Street Painting Festival is a City-sponsored event benefiting the Center for Hearing and Speech (CHS).  The festival raises more than $400,000 annually to fund health and educational services for children with hearing loss in Houston.

Scott’s most recent album is named after the now-defunct amusement park, which has created quite a bit of nostalgia around the city since it closed in 2005.

Fans of his significant other Kylie Jenner waited in the rain for a chance to see her at a popup shop for her makeup line.

Hundreds of fans, with their cameras ready to go, cheered on Jenner as she arrived.

She announced on Twitter she was going to be here around noon and fans started camping out.

The 21-year-old’s makeup line, Kylie Cosmetics, has made her a near-billionaire.

She spent about 15 minutes in the store before coming back out and taking more pictures with fans.

Later in the day, Scott’s fans showed to his pop-up shop in Rice Village.