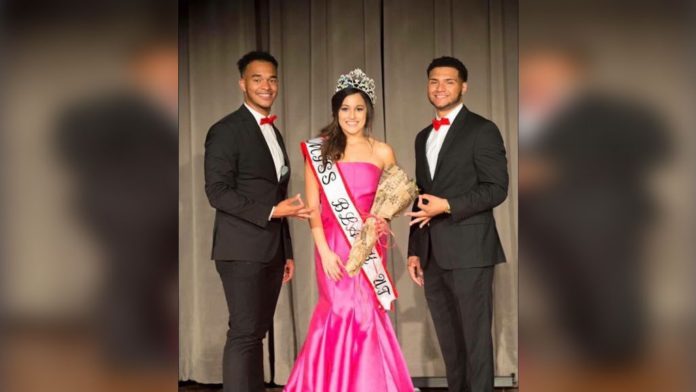 Rachael Malonson has always struggled with her biracial identity. After being crowned Miss Black University of Texas, social media users attacked her for the way she looks.

Malonson is not letting it ruin her moment, though.

“For me, I’ve always had to battle ‘I’m not Black enough.’ But to not just place, but win the title is truly rewarding,” said Malonson, who’s from Magnolia, near Houston. Malonson said she felt empowered after winning the pageant on April 30. Before that, she was uncertain of where she fit in.

“I remember I felt so insecure because people didn’t understand who I was by my look,” Malonson told the campus student newspaper. “I’m confident in it now and see it as a unique trait where I’m able to teach people that not every Black person [and] not every mixed person looks the same way.”

Kappa Alpha Psi, a predominantly Black fraternity, has hosted the pageant for 35 years at the UT. The scholarship pageant is open to Black women, including those who are biracial.

When the organization posted the photo of the winner, Twitter users were quick to criticize Malonson based on her appearance, questioning her Black identity.

It quickly escalated to a social media debate on colorism, a form of discrimination based on skin color. Colorism is not the same as racism. It’s a form of bias that revolves around the shade of skin color, not a prejudice on actual racial status.

“The Black community is supposed to support each other. If you’re Black, you’re Black,” said Malonson, who graduates this month with a degree in journalism.

Social media users questioned Malonson’s background, often saying she was “too light.” Her father is Black and mother is white. Malonson said the avalanche of tweets got so bad she deleted the app from her phone.

Though some were quick to criticize, she said several UT students supported her online.

UT senior David Moton, a pageant organizer who also is biracial, said he felt a responsibility to defend Malonson.

“People were trying to say she only has one Black parent, so she isn’t Black,” Moton said. “And I was like, ‘That’s me. And I dare someone to tell me that I’m not Black.’ “