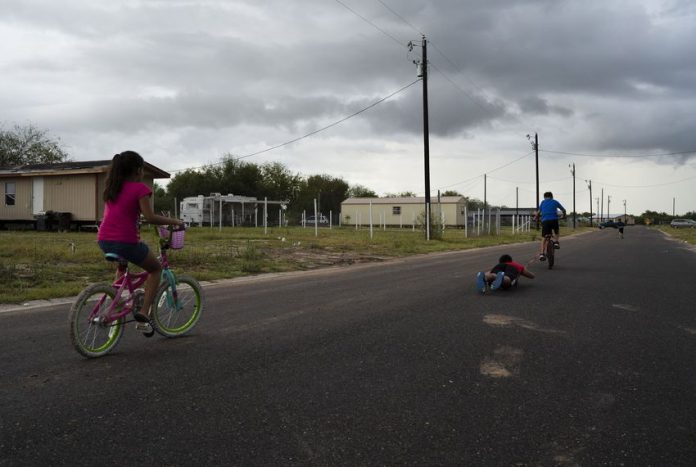 A Hispanic or Black child in Texas is three times as likely to live in poverty than a white child.

Hispanic and black households face a gap of tens of thousands of dollars between their median incomes and those of white and Asian Texans.

And families living in the Rio Grande Valley are still burdened with poverty at a rate that’s double the state figure.

Despite the grim, long-standing realities of income inequality in the state, 2017 proved to be a year of solid economic improvement for Texas with ongoing gains that are reflective of the state’s post-recession bounce. The overall poverty rate and child poverty rate dropped to their lowest levels in more than a decade, and incomes continued to rise across the board.

The latest estimates released Thursday by the U.S. Census Bureau put the state’s poverty rate at 14.7 percent, down from a high of 18.5 percent in 2011. Roughly one in five Texas children — 20.9 percent — lived in poverty last year — a significant decrease from a recent high water mark set in 2011, when almost 27 percent of children were poor.

That progress, though, was dimmed at the local level. The poverty rate either increased or barely budged in a third of the state’s 25 metro areas, and the share of residents living in poverty in half of those areas surpassed the state figure with poverty concentrated in places like South Texas, where the poverty rate is double the state rate.

South Texas’ metro areas, home to predominantly Hispanic communities, have for years ranked as the poorest areas of the state. They are also home to the highest rates of child poverty in the state.

Despite improvements from previous years, the McAllen area had the highest rate — 42.4 percent — of children living in poverty. The Brownsville-Harlingen metro area claimed the second-highest rate at 39.2 percent. In Laredo, which had the highest overall poverty and child poverty rates in 2016, 37 percent of children were living in poverty — down from a high of 45 percent the year before.

The Census Bureau determines poverty based on income and family size. For example, an individual is classified as living in poverty if he or she makes less than $12,752 a year. A family of four with two children would be classified as poor if its income is less than $24,858.

Those economic improvements have done little to ease the poverty chasm between white residents and Texans of color.

With poverty rates twice as high as those for white Texans, Hispanic and black residents are disproportionately burdened by poverty, with Hispanics making up more than half of the state’s poor population even though they’re far from the majority of the state’s population.

Rising incomes for women helped to decrease a wage gap between Texas women and men that had barely budged in recent years. But Texas women are still far from reaching income parity.

In 2017, women who worked full-time, year-round jobs in Texas were paid 81.4 percent of what men were paid — an increase of two percentage points from 2016. Instead of making about $10,000 less in median earnings, Texas women made about $9,000 less last year.