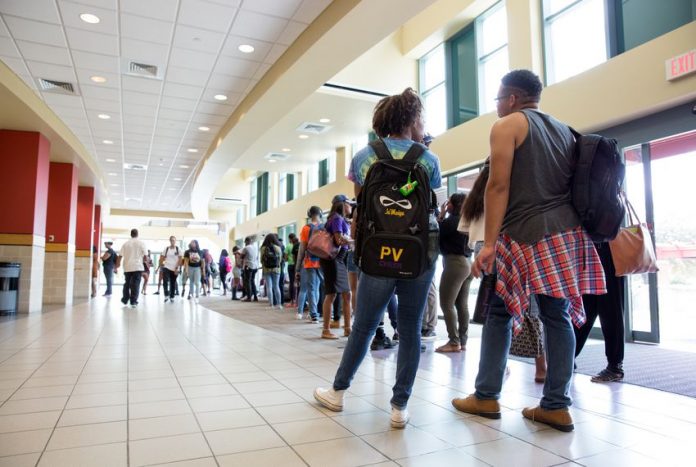 Five students at Prairie View A&M University are suing Waller County, which is home to the historically black university, over allegations that the county is suppressing the voting rights of its black residents.

In a lawsuit filed Monday, the students accused the county of violating the federal Voting Rights Act and the U.S. Constitution by not providing any early voting location on campus or in the city of Prairie View during the first week of early voting. The suit says the county’s decision “imposes a substantial and unwarranted burden” on student voters and denies them “an equal opportunity to vote” compared to the county’s non-black voters.

“There is no legitimate, non-discriminatory reason for defendants to deny opportunities for early voting during the first week to plaintiffs and black voters in Prairie View on an equal basis with other non-black voters of the Waller County,” the lawsuit reads.

Alleging that the county was treating black voters as second-class citizens, the students — represented by the NAACP Legal Defense and Educational Fund — asked a federal judge to force the county to set up an early voting site on campus that offers weekend hours.

In the lawsuit, the students noted that the county failed to set up any polling locations on campus or in the city of Prairie View, which has a majority black population, during the first week of early voting. The plaintiffs noted that the county is planning to provide five days of early voting in Prairie View during the second week, but early voting during two of those days will be held at an off-campus location that is not easily accessible to students that lack transportation. Neither site would offer weekend hours.

County representatives could not immediately be reached for comment on Monday evening, though plaintiffs said in the lawsuit that the county’s commissioners court, which is charged with establishing the county’s early voting locations, offered various justifications for the early voting plan, including that it was proposed by members of both major political parties and that early voting at the university was not included for the first week because it would conflict with homecoming.

Prairie View A&M students have a long history of fighting for increased access to the ballot box. In a 1979 voting rights case that went to the U.S. Supreme Court, the court affirmed students’ rights to register to vote at their college address even though county officials claimed the students were not residents. It wasn’t until 2013 that students won a decades-long debate over the need to open an Election Day polling location on campus.