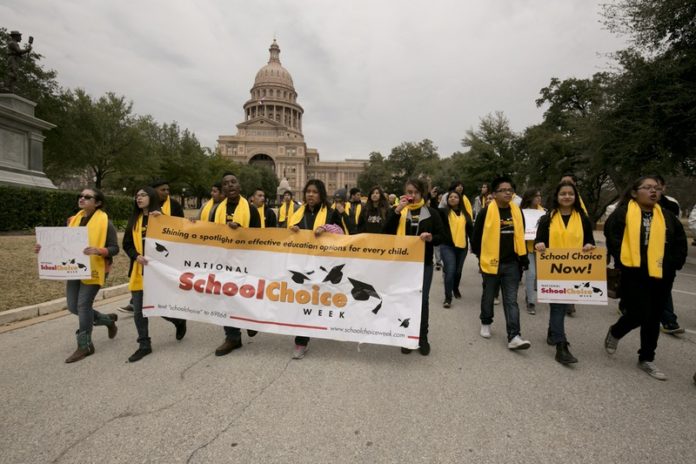 The Texas Tribune | BY ALIYYA SWABY

Thousands of students, activists and family members are expected to flood the Texas Capitol lawn Tuesday morning in a sea of signature yellow scarves as the Legislature prepares for a fight on whether to let parents use public money for private school tuition.

In advance of the “National School Choice Week” rally, an event that has become a session tradition over the past decade, organizers said they feel closer than ever to actually seeing a bill for private school choice make it to the governor’s desk. For the first time, Gov. Greg Abbott and Lt. Gov. Dan Patrick will headline this year’s rally, scheduled for 10 a.m. on the Capitol’s south steps.

Patrick is expected to unveil his bill this week advocating for education savings accounts — state-issued debit cards that parents can use for private school tuition and other education expenses. A former chairman of the Senate Education Committee, Patrick has championed private school choice legislation since he first became a state senator in 2007.

Abbott last month was more vocal than ever in his support of private school choice, saying he would sign the “most pro-school choice law” arriving on his desk.

“I think it shows progress,” said rally organizer Randan Steinhauser, executive director of Texans for Education Opportunity, a new nonprofit focused on getting lawmakers on board with education savings accounts.

Tuesday’s rally will be one of more than 1,500 events planned in Texas for National School Choice Week, according to event organizers.

Most of the families who attend Tuesday’s rally will have children enrolled in a charter school or on the waitlist for a charter school, Steinhauser said. Private and parochial school students are also expected to attend the rally, “in recognition of the quality education Catholic schools provide,” she said.

In the previous legislative session in 2015, the Senate passed out a bill for “private school choice.” It never got a hearing in the House.

Critics of education savings accounts and vouchers are also readying for another fight, arguing that such legislation saps taxpayer dollars from the public school system and does not show positive results for families.

Public school educators have urged Texas lawmakers this year to increase the amount of money it sends to public school districts. Many argue any funding for education savings accounts would come out of funds that would otherwise be available for public education.

“We would be underfunding at a greater level if we siphon off dollars and send those to vouchers,” said Gary Godsey, executive director of the Association of Texas Professional Educators. “It would only hurt the public education system.”