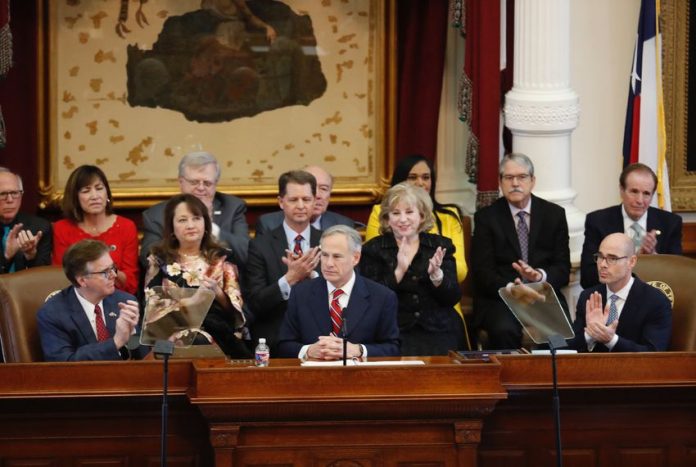 Gov. Greg Abbott, in his biennial State of the State address Tuesday, stayed on message about schools and taxes, continuing state leaders’ so far unified focus on bread-and-butter policy reforms in a forum where he has in the past served up red meat.

Speaking in the Texas House to both chambers of the Legislature, Abbott named as emergency items the consensus priorities of school finance reform, teacher pay raises and property tax relief, the issues he and the state’s other top two Republican leaders have trumpeted almost single-mindedly in the months since the midterm elections. In doing so, he carefully avoided controversial social issues like the ones that headlined last session’s speech.

Also topping the governor’s priority list: school safety, disaster response and mental health programs. Abbott’s designation of those priorities allows lawmakers to take up such measures sooner, lifting the usual constitutional limitation that prevents the Legislature from passing bills within the first 60 days of the session.

“Our mission begins with our students,” Abbott said as he began to lay out his legislative priorities. To improve lackluster student outcomes — only 40 percent of third-graders are reading at grade level by the end of their third-grade year, he said, and less than 40 percent of students who take the ACT or SAT are prepared for college — “we must target education funding.”

“That starts with teachers in the classroom. … This session, we must pay our teachers more,” Abbott said, winning his first standing ovation of the speech.

“Rarely has Texas witnessed such a bipartisan and bicameral support for an issue this substantial this early in a session. … To keep this momentum going, I am declaring school finance reform and increasing teacher pay as emergency items,” the governor said to another standing ovation.

Abbott expressed support for a merit-based teacher pay system, praising Dallas ISD’s program as exemplary and asserting that “we must provide incentives to put effective teachers in the schools and classrooms where they are needed the most.”

The highest-profile teacher pay bill so far came out of the Texas Senate, whose leader has championed an across-the-board pay raise of $5,000 for all Texas teachers. The House’s initial budget proposal would put billions more into school funding but leave districts more flexibility on how to spend it.

Abbott pledged, as he did in his inaugural address last month, that this is the year lawmakers will finally unknot the entangled policy issues of school finance and property tax reform. Last week, Abbott, Lt. Gov. Dan Patrick and House Speaker Dennis Bonnen, along with leaders on the issue from both chambers, laid outidentical property tax reform bills that they said would help lift the burden of skyrocketing property taxes.

Abbott praised House and Senate leaders for “working together in unprecedented fashion.”

“We can no longer sit idly by while property owners are reduced to tenants of their own property with taxing authorities playing the role of landlord,” the governor said.

In the wake of tragedy last May at Santa Fe High School outside Houston, Abbott said, “We must do all we can to make our schools safer.” He praised a proposal from Sen. Jane Nelson, R-Flower Mound — filed as a priority bill Tuesday morning — that would create a broad-based mental health consortium. He made no mention of gun control measures.

Abbott also called for two new anti-gang centers in Waco and Tyler, as well as additional funding to create six human trafficking squads and eliminate the backlog of thousands of untested rape kits. Two years ago, the Legislature passed a law to crowdfund money for rape kit testing by asking for donations during driver’s license renewals.

Unlike in his first two State of the State addresses, Abbott did not deem ethics reform an emergency item. He tagged that issue with top priority status in 2015 and 2017, but didn’t mention it this year. Nor did he raise any proposals related to abortion. And there was hardly any other mention of health care, an expense that takes up nearly as large a share of the state’s budget as does education.

House and Senate Democrats called it “disappointing” that the governor didn’t propose expanding access to pre-K or lowering the costs of teachers’ health care.

And state Rep. Toni Rose, D-Dallas, who serves as the caucus’ second vice-chair, said that Abbott, for all his bragging on the state of Texas during his speech, failed to mention the state’s high uninsured rate for health care.

“Texas needs to expand Medicaid,” Rose said during the conference, “and we need to expand it today.”

Still, Democrats were optimistic about some of the notable absences. Two years ago, Abbott’s address was headlined by his call for an anti-“sanctuary cities” billthat Democrats would staunchly oppose. This year, the governor mostly stayed away from hot-button social issues.

“It certainly was a different speech than we heard two years ago,” state Rep. Chris Turner, the Democrat who heads his party’s caucus in the House, said after the speech. “It seems as though election results have consequences.”

Another conspicuous absence from the speech was the voter rolls debacle that has dogged state leaders in recent weeks. Last month, Texas Secretary of State David Whitley flagged for citizenship review nearly 100,000 Texas voters; in the weeks since, the list has been revealed to be deeply flawed, and civil rights groups have sued the state three times.

Abbott was vocal about the list when it was first released, and at a press conference last week, he stood behind the list as a “work [in progress,]” even as local officials reported that, in some cases, all the names on counties’ portions of the list were erroneously included. But he made no mention of the list or of election security in the high-profile address Tuesday.

And the governor of the nation’s largest border state made little mention of immigration reform beyond a promise to continue to “step up and fully fund our border security program” since “the federal government still has not fulfilled its responsibility.” In their initial budget proposals, both the Texas House and Texas Senate proposed continuing to spend about $800 million on border security over the next biennium.

In a fitting end to the conciliatory, unity-themed speech, Abbott pledged to work with a lawmaker he’s had harsh words for in the past.

In last year’s elections, Abbott backed a primary challenger to state Rep. Lyle Larson, a San Antonio Republican who won the seat anyway. On Tuesday, Abbott said he would work with Larson to tackle a top state priority: reinstating the rivalry football game between the University of Texas at Austin and Texas A&M University.

“I am inspired by the camaraderie and the collaboration that has already infused this session. It seems unprecedented, and I’ve got to tell you, I’m feeling it myself,” Abbott said near the end of his remarks. “I’m feeling moved. And I want to set the example.”