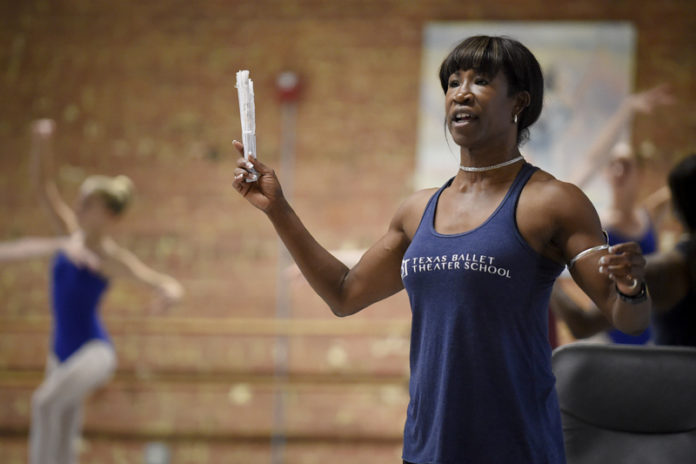 Renowned ballerina Lauren Anderson, a Houston native, was supposed to return home on Sunday. But after Hurricane Harvey left the nation’s fourth largest city under water and Anderson stuck in Helena without her family, she decided to put her extra time to good use for local children.

Anderson was in Helena this weekend to teach a master class at Queen City Ballet. A critically acclaimed dancer, Anderson performed in leading roles in all the great classical ballets.

She was the first African-American to be promoted to a principal dancer at Houston Ballet, where she started dancing in 1983 and continued until 2006. Her ballet shoes are on display at the Smithsonian Museum of African American History and Culture. After retiring, Anderson continued working for the Houston Ballet to teach master classes and give lectures.

On Tuesday, Anderson taught a three-hour rehearsal with Queen City students to wrap up her fifth day teaching in Helena, the Independent Record reports (http://bit.ly/2xNt6rT).

Her son, Lawrence, and other family members, are in Houston. The storm has produced more than 50 inches of rain in Houston and displaced tens of thousands of people.

“Everybody is safe,” she said. “But I have a son and family there and I want to get as close to them as possible.”

What once were freeways leading to her home are now waterways, and Anderson has no way of knowing if anything is left.

“I don’t care about that. You can always get another house,” she said. “But you can’t get more loved ones.”

The Houston Ballet, where Anderson is supposed to be back to teach this week, is filled with water, and surrounding airports are closed until at least Thursday.

“Life is on hold and prayers are being sent to Houston and the surrounding areas,” she said.

With her family and community on her mind, Anderson said being in the studio is one of the few things that helps.

Campbell Midgley, the owner of Queen City Ballet, used to dance with Anderson at the Houston Ballet. She was more than willing to have one of the best in the world teach her students for two extra days.

“To be here for five days is really unheard of,” Midgley said.

Anderson said she teaches a standard intermediate class to see where her students are and adjusts from there. While she always challenges her students, she said, she doesn’t give them anything they can’t handle.

“They were incredible,” she said. “The technique here is really good.”

Anderson started ballet at age 7 and was encouraged by her mom, who taught classical piano, and her dad, an assistant principal at a performing arts high school. When she was 11, she said dance picked her. She wasn’t great at the time, but she could do a jump that no one else could.

“I found something that was different besides the way I looked,” she said.

With decades of hard work that led to acclaim, Anderson said ballet remains universal, but there are more opportunities now. She said there are students in her classes that remind her of dancers she grew up with, but they are more likely to be people of color.

“Plie is plie. It doesn’t matter what country you’re from or what city you’re from,” she said. “It’s classical. It’s taught the same way. The shades of people are different.”

Anderson is anxious to get home and reunite with her family. She plans to return to the Heights neighborhood and eventually the Third Ward when the water goes down. Once repaired, she’ll return to the Houston Ballet, where she says she belongs.