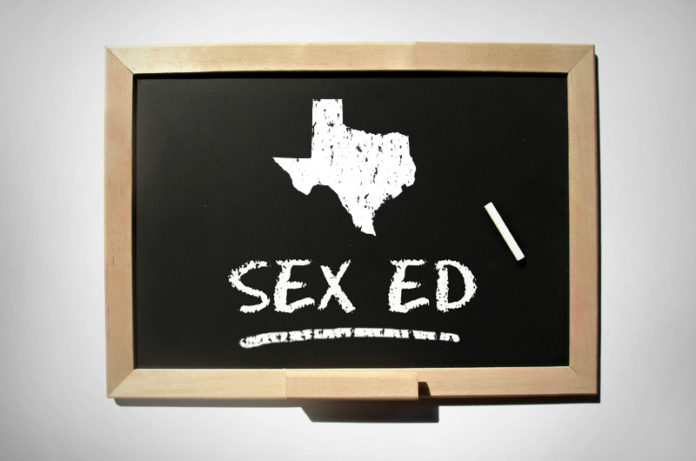 BY CASSANDRA POLLOCK | The Texas Tribune

A quarter of Texas public school districts offered no sex education at all during the 2015-2016 school year, according to a new study released Tuesday by the Texas Freedom Network. Nearly 60 percent of districts used abstinence-only education programs over the same period.

“Our state has become the poster child for abstinence-only-until-marriage sex education,” said Kathy Miller, president of Texas Freedom Network at a Capitol press conference. “[At the Legislature], it sometimes seems that sex education is a four-letter word to only be muttered in adult company.”

While 58.3 percent of school districts in Texas taught abstinence-only programs, that’s down from 94 percent in 2008, according to the study. Meanwhile, the number of school districts that adopted an approach known in education circles as “abstinence-plus,” which still encourages abstinence but also discusses accurate information on other pregnancy prevention methods and sexually transmitted diseases, rose from 3.6 percent to 16.6 percent of all districts.

Wiley said part of the state’s high teen pregnancy rate was attributable to outdated textbooks on the subject and changes to the state’s graduation requirements. In 2009, state officials stopped requiring completion of a health education class for a student to graduate, leaving the issue up to school districts to offer the class as an elective or make it a local requirement.

“Far too many school districts have let this go,” Wiley said, calling on the Legislature to update the state’s 13-year-old textbooks and restore health education as a statewide requirement for all Texas public school districts.

While the state’s policies toward sexual education has long been a lightning rod, many conservatives disagree with efforts to impose statewide mandates.

“I think our public schools should focus on reading, writing, math and history as the core competency,” said Alice Lanahan, a Texas mom and education activist. “The social, emotional issues are not the role of the public schools. Does a kid get a good job when they graduate high school or college because they can read and write, or is it because of their belief in marriage between two people, regardless of the side they’re on? That’s where we’re missing the boat as adults.”

Lanahan said she personally backed the abstinence-only approach by public schools because it was the only “100 percent foolproof” and “healthiest way” to prevent unexpected pregnancies.

State Rep. Mary González, D-Clint, who also spoke at Tuesday’s news conference, called it hypocritical for Republican lawmakers to push for restricting access to abortion while failing to provide the necessary information to educate Texas students about sexual health and pregnancy prevention in the first place.

“What does the next generation of Texas look like without accurate information?” González asked, adding she thought there was an opportunity to have a bipartisan conversation on the topic. Last week, she filed a bill that would require public school districts to have an age-appropriate sex education classes at grade levels determined by the State Board of Education.