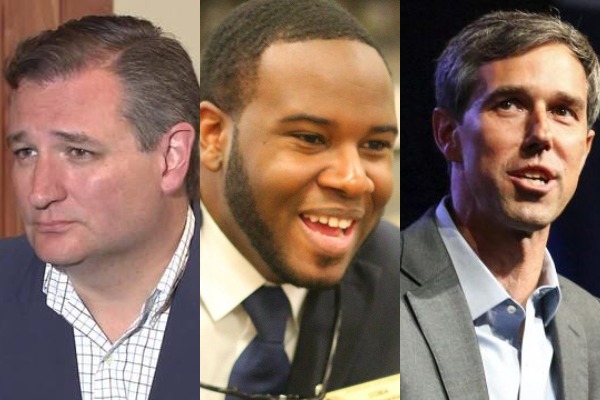 Republican Sen. Ted Cruz criticized Democratic rival Beto O’Rourke for his response to the shooting of Botham Jean at the hands of a Dallas police officer.

Rep. O’Rourke (D-Texas) argued that officer Amber Guyger should be fired after shooting and killing an unarmed Jean in his own apartment earlier this month after reportedly mistaking his unit for her own. Cruz seized on this by saying he wished O’Rourke and other Democrats “weren’t so quick to always blame the police officer.”

“It’s possible what happened was a horrifying and horrific misunderstanding, or it may be something else,” Cruz said Saturday in an interview with Fox 26 Houston. “And that’s why we have a legal justice system, to actually learn what the facts are and learn what happened. I wish Beto O’Rourke and Democrats weren’t so quick to always blame the police officer, always attack the police officer.”

Guyger, 30, has just finished a 15-hour shift when she fatally shot Jean. However, several inconsistencies in her story have raised suspicions and led to more questions than answers.

The officer has since been charged with manslaughter but could face more serious charges.

At a rally last week, O’Rourke addressed the tragic shooting and said Guyger should be fired, according to Fox 4. The congressman questioned how a Black man could be killed in his own home and noted how the discovery of marijuana inside the apartment gave the implication that the shooting was somehow justified.

“I think we are all counting on the district attorney, on those in positions of trust and power right now to do the right thing,” he told the crowd of rally-goers. “But we’re also counting on the community, many of whom are in downtown right now protesting, ensuring — not waiting for it — ensuring that will happen.”

“There has to be a full accounting for how young Black men continue to be killed in this country without accountability, without justice, without these full investigations, without respecting their civil rights,” O’Rourke added. “This cannot continue.”

When asked if Guyger should lose her job, the congressman replied, “I don’t understand, given the actions, how anyone can come to any other conclusion.”

While folks are clearly horrified at what happened, Cruz said the officer deserves her day in court and warned the public against “jumping to conclusions” before all the facts come out.

“She may have been in the wrong,” Cruz said in his Fox 26 interview. “She’s facing legal proceedings and if a jury of her peers concludes that she behaved wrongly, then she’ll face the consequences.”

He added, “But I don’t think we should jump to conclusions. It may have been just a horrific misunderstanding with horrifying consequences.”